"Background, upbringing and education combine toward the immense privilege involved in simply seeing the arts as a potential career. We desperately need people from all sorts of different backgrounds going into the arts. That’s only got harder under this government."

Yippee Ki Yay is the movie Die Hard, retold as an epic poem. That may sound silly. It definitely *is* silly. We’re having a lot of fun with the story, from a place of huge love for the film.

For legal reasons I’m obliged to say it’s a completely unauthorised parody. But parody implies I’m not taking this seriously. I absolutely am. I say that as former London poetry slam champion, Fringe First winner, BBC Audio Drama Best Comedy winner and New York cop (one of these is untrue).

There is no better place to tell the story of a New York Cop than a Scottish wine bar.

Edinburgh encourages experimentation. Outside a festival environment, you maybe want a little more certainty in what you go and see because it’s the only show you’re going to that day / week / however long. But at the fringe you might be seeing several shows a day so you’re more open to taking a risk on one or two of those. Maybe you’ll go and see poetry Die Hard FOR EXAMPLE.

I loved watching drama and comedy so wanted to try making it.

I spent about ten years trying to be a combination of Timberlake Wertenbaker and Arthur Miller. No one told me to do that. Just did it. They're good at being them and no one needed my pale imitations. It was only when I started being me, writing me, that I progressed from 'oh, you're somewhat promising, come do a workshop and have a rehearsed reading' to being given access to audience, and opportunity, and money. (Which is not to say that's what you should write for, write for whatever reason you choose. But money is nice).

It’s had a huge impact. My uncle ran a youth theatre in Sevenoaks and as a kid I got to hang out in rehearsals and watch these incredibly glamorous teenagers putting on a show. I remember one year at the fringe, they recreated the Buster Keaton stunt where a house falls on him. It was amazing! That plus my mum’s LPs (see below) got me into theatre, although I had no notion of working in the arts at that stage.

And honestly, background, upbringing and education combine toward the immense privilege involved in simply seeing the arts as a potential career. We desperately need people from all sorts of different backgrounds going into the arts. That’s only got harder under this government.

Musicals. My mum had some musicals on vinyl, which I wasn’t allowed to touch, but she’d play them for me and I’d listen to the songs and read the synopses of the stories on the back. Then I started writing stories for musicals based on the Now! albums. I’d write a narrative containing every song on a Now double album, in order. They’re all gone now, which is a huge loss for theatre and indeed the entire human race.

Editing TV. I was a video editor for many years before I started being paid to write. I was hugely lucky to get a job working for The Adam and Joe show, back when they were famous for TV, not podcasts or Hollywood.

Yes. I was working on a play (basically, an apocalomcom) that I felt no one would want to see soon after a pandemic. I co-wrote a covid sitcom with the outstandingly talented writer, director and dog-owner Jon Brittain. (Check out his show Kathy and Stella Solve a Murder! at Roundabout).

I don’t approach shows with a different mentality but, given there are more ideas than time to write them, I’m leaning towards what I think will be the most fun to write and to watch. Hence Yippee Ki Yay.

People use that term to mean very different things in different contexts, so it’s a difficult issue to address in this format.

Freddie Mercury. Because I’d get to meet him.

Yippee Ki Yay is performing at Gilded Balloon at 2:35pm from 3-29th August. For tickets and more information visit edfringe.com. 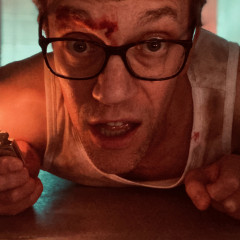 "Background, upbringing and education combine toward the immense privilege involved in simply seeing the arts as a potential career. We desperately need people from all sorts of different backgrounds going into the arts. That’s only got harder under this government."