Harry Kershaw, founding member of Olivier award winning Mischief Theatre, is bringing a new show to Edinburgh Festival Fringe this year. We talk about Boris III, his career path, and how Covid-19 changed the way he worked.

Hi! My name is Harry Kershaw and I’m playing Boris Johnson in ‘Boris III’ at the Edinburgh fringe.

‘Boris III’ is a story about when Boris was at Eton and played Richard III in a school production of Richard III. Apparently he didn’t learn his lines and the whole thing was a bit of a disaster. Boris III imagines what that might have been like. The play is very funny and also explores the nature of leadership.

I haven’t performed at the fringe in about seven years. When I was at drama school and a few years after that, Mischief Theatre started doing an improvisation show called ‘Let’s see what happens!’ What happened was a terrible show that morphed into a show called ‘lights camera improvise’ and then became ‘Mischief Movie Night’. It took many years and a huge amount of failure to get the show to a place we were happy with. I think it’s fair to say nobody in London was interested in the show but it found an audience at the fringe. I think being at a festival where new work and new acts often find an audience for the first time alongside established world class talent makes it a really exciting place to perform.

I’m fairly confident in saying it’s the biggest arts festival in the world! Without talking down to other festivals, which are many and excellent, it’s just much bigger. There’s something for everybody. Other than the hugely varied shows you can see, I would have to say the weather. It can’t and must not be trusted.

I’ve got two older brothers. I was massively massively shy as a child and if I was on stage people had to listen to me. This was something that didn’t happen in any other setting. Flawed logic I know but it made sense at the time. My mother signed me up for GCSE drama because she knew I wanted to do it but was too shy to admit it. I claimed I wanted to do Geography instead but it wasn’t true. My Geography has remained terrible to this day. I have absolutely no sense of direction. Rather than any individual I’ve just always loved stories. I love ‘Butch Cassidy and the Sun Dance Kid’ but I also love films like Anchorman.

I think I was always encouraged to question everything which is really helpful when creating anything. I’m also dyslexic so I had to give the impression I knew what was going on when I clearly didn’t. Which is a kind of acting in itself. I think being as terrible as I am at sport when I was at school meant drama was a less embarrassing option. As a result I did lots of acting when I was at school, and ended up being in a film called ‘Unrelated’ which was directed by Joanna Hogg when I was about 15 with Tom Hiddleston and Henry Lloyd Hughes. This had a huge effect on me and really encouraged me to go to drama school which i did  and loved. Quite a lot of it was improvised and it started me down quite a specific road.

I’d be a writer. When I was younger I wanted to be a hotel or food critic because I think that sounds great. I still think it does. But I’d hopefully be doing something creative.

Well we did our movie themed improvisation show ‘Mischief Movie Night’ as a live stream during lockdown. It was a very different experience because there was no live audience at all to start with until it was safe for them to be there. You had people in the room but they were either playing live music or filming it or doing any number of technical things… so not only was it silent in the room it was sort of sterile. It was strange going on social media to work out if people had enjoyed the show and if so what they had enjoyed. Quite often it was something different to what you had thought it would be, so that was strange. But I also think it created a stronger bond between the people in the show and the people watching and a community of wonderful people. With that particular show you just had to go with your gut and do what you thought was good work as you didn’t have the immediate response of the audience to guide you. I think that’s always true but it really clarified it in case there was ever any doubt.

I suppose you don’t take it for granted that the show will definitely happen in the way that you did in the past. I did a musical called ‘What’s new pussycat?’ recently, and I had such a wonderful time doing it. Maybe I was even more grateful to be there than I had been in the past and more excited that each show was actually happening. Having done shows with no audience, or to a much smaller socially distanced audience, makes the experience of performing something to a full house even more exhilarating.

I think I’d like to see what it was like to work with a Hollywood heavyweight superstar like Marlon Brando or Marilyn Monroe. I have no idea what I could possibly have played opposite either of these people but you might as well go back in time and aim high right?

Take something or create something that you enjoy and are proud of. Invest in an umbrella.

Boris III will be at the Pleasance Courtyard One at 4.10pm for the month of August for tickets go to www.edfringe.com 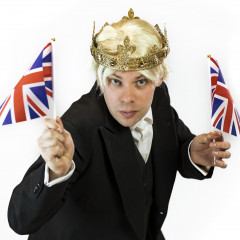 Harry Kershaw, founding member of Olivier award winning Mischief Theatre, is bringing a new show to Edinburgh Festival Fringe this year. We talk about Boris III, his career path, and how Covid-19 changed the way he worked.