Cirque Berserk's returning to Edinburgh Festival Fringe this August, and we speak to acrobat Paulo Dos Santos about the show, his background, and offers a practical solution to the accommodation issues in Edinburgh during the Fringe.

I am Paulo Dos Santos, a 35 year-old Brazilian circus comedian and acrobat appearing at the Edinburgh Festival Fringe with Cirque Berserk! (Pleasance at the EICC).

Cirque Berserk! is REAL circus made for theatre. It combines all the thrills and skills of traditional big top circus with the artistry of contemporary “cirque” shows – it’s designed to entertain people of all ages and backgrounds. I’m part of an amazing company of talented performers from across the globe – including Brazil, Argentina Cuba, Spain, Tanzania, Kenya, the Czech Republic, Mongolia, Ireland and Ukraine. The show features aerialists, acrobats and daredevil stuntmen. This year we have FIVE motorbikes in our famous Globe of Death - the only time you will see this on stage anywhere in the UK.

This will be Cirque Berserk’s third Edinburgh Fringe and my own second. I have performed at many festivals around the world, but this one has a truly unique multi-cultural and multi-generational creative buzz. We always get lots of invitations to appear overseas when we perform at the Fringe, but the really great thing is that a lot of our audience are local people from Edinburgh.

As well as being the world’s biggest arts festival, it is “open access”, which means that literally anyone from anywhere is welcome to come and present their work.

I have a condition called achondroplasia which means that I am 3 foot six inches tall, and when I was a teenager I was bullied. I joined a class and learned capoeira, an Afro-Brazilian combination of martial arts, dance and acrobatics. My teacher gave me confidence and I won a big local competition. After that, I also worked hard to learn some circus skills – including acrobatics and an aerial straps act. This enabled me to travel and perform all over the world, including Ringling Brothers Circus in America and Zippos Circus in the UK.

Circus is the most diverse and inclusive art form I know. I have always felt at home in the circus – it is a global community which accepts people for what they are and creates opportunities for performers with an extraordinarily wide range of skills. My inspirations were the travelling circus performers who I watched as a child in Brazil. They would arrive in town, set up the tent and create a magical world that I could escape to.

Watching the local capoeira competition and thinking “one day, I would like to do that!”

I honestly can’t imagine doing anything else. Circus is much more than a job, it is a way of life.

Between lockdowns, I was performing with Zippos Circus in its big top and Cirque Berserk! in the West End. Our work at this difficult time was supported by the Cultural Recovery Fund, the first time that traditional circus had received government funding in this country. We had to make some complicated practical changes to the way we worked with each other and interacted with audiences; it was very challenging, but people were delighted that we were making the effort to bring live performance to them. It’s going to take a lot of hard work for the performing arts to rebuild what we had, but the circus returns now with a new sense of pride and purpose.

It’s great to be back!

Why would anyone want to cancel culture?

My comedy partner Whimmie comes from a family of circus clowns. His great great grandfather went by the name of “Whimsical Walker” and performed at Windsor Castle for Queen Victoria… fortunately she WAS amused! I’d love to have worked with him… photographs show that his costume was amazing! There is plenty of knockabout comedy in our own show, although these days we don’t wear red noses.

If you can’t find accommodation during the festival, then bring your home with you! “Home” for circus performers is our caravans, so all we need is a field to park them in… and luckily we have found one that’s not too far from our venue!

Twice daily at the EICC

We can be found at: https://www.cirqueberserk.co.uk

Cirque Berserk! will be at the EICC twice daily at 1.30pm and 6.30pm for the month of August for tickets go to www.edfringe.com 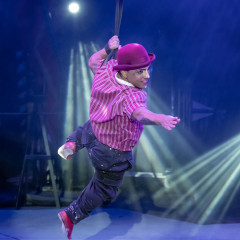 Cirque Berserk's returning to Edinburgh Festival Fringe this August, and we speak to acrobat Paulo Dos Santos about the show, his background, and offers a practical solution to the accommodation issues in Edinburgh during the Fringe.