"I think it was out of spite? An ex-boyfriend thought he was funnier than me so I spent the last 7 years proving him wrong. And if that's the kind of effort I put into one-upping someone, imagine how much effort has gone into my show!"

My show, Cake, is all about my wedding day, and how it was quite different to what I had planned thanks to the pandemic. So, if you like a good love story with jokes, you should come. You want a show with pleasant LGBTQ+ vibes? You should come too. OR if you just got married and want to see if your wedding was better than mine, you should come too, you judgy little minx.

Attention, mostly. But genuinely, as this is my first show, my hope is that lots of people come to see it and some good things come from it. To be honest, I’ll be happy as long as a few people go “You know what, we loved that show”. Hopefully, it’s more than a few though… Also, I live in Edinburgh with my husband now, and I’ll do anything if it’s incredibly convenient.

I’m very lucky to get to do it. I’m aware that a lot of comedians are opting not to go to the fringe for very good reasons. It’s too expensive, it’s not accessible enough, it doesn’t always feel like a level playing field. I certainly hope the Fringe listens to these valid critiques and makes an effort to do something about them. I dunno, maybe make an app or something? Fingers crossed…

Other festivals, you go to them and maybe do your show a couple times. In Edinburgh, you do a whole month of your show, one performance every day, plus all the other mixed bill and variety shows you do on top of that. It’s like going to Thorpe Park, but instead of being a visitor, you’re one of the rides. It’s exhausting.

Genuinely, I think it was out of spite? An ex-boyfriend thought he was funnier than me so I spent the last 7 years proving him wrong. And if that's the kind of effort I put into one-upping someone, imagine how much effort has gone into my show!

I will say, sincerely, I had always wanted to do stand-up ever since I saw Victoria Wood’s show at the Royal Albert Hall. On VHS, I wasn’t there in real life.

It’s hard to say. I’m from a very rural, very small town in Cornwall, and as a gay man it wasn’t easy for me. Though I feel attitudes have changed since I grew up there, I did have a rough time of it, and one of the results of that was not wanting to speak-up, not having much of a voice and not wanting to be in the spotlight. So, although I had this desire to one day be a stand-up comic, I always told myself it’d be too scary, people would mock me.

Obviously, I’ve grown up and overcome that now. But it feels like I’m on a delay, and I always wonder what would have happened if I had the confidence to pursue all this when I was younger. And that’s quite a common feeling for anyone in the queer community. We spend so much time hiding our real selves from people for fear of ridicule or judgement that it means we don’t develop as people at the same time as everyone else.

Growing up, I think my mum had this really abstract painting up on the wall and she’d always talk about the meaning she saw in it, what the artist’s intentions were, why the painting was structured the way it was. She knew everything about it. Then one of her friends came over one day and pointed out she’d hung the painting upside down. Art is subjective, I guess.

I have always wanted to get super fit and become one of the Gladiators, like the ones off the TV show. Like Jet, but with a moustache. It’d take some doing though, I’m not particularly battle ready. The other day, I hurt my neck chewing a particularly stale piece of shortbread

Well, this is really what my show this year is about. I wrote my show all the way back in 2019, and it was a show all about planning my wedding that I was going to have not long after the Edinburgh Fringe in 2020. Little did I know Rona was round the corner, ready to put a spanner in the works. To my show and to my wedding. Both cancelled.

Now the fringe is back, I’ve had to totally rewrite my show. In that 3-year gap, my husband and I did a quickie registry office wedding on one of the most chaotic days of our lives. Very different to the wedding we planned before, and very different to the wedding I described in my show. So, I’ve spent a fair amount of time reworking the show’s narrative. I think what’s become of it all is a fun show with a nice story, something that people can maybe relate to better.

You’re joking!? Not another one!

I’m so sorry, I’d love to comment on this but you can’t say anything these days, can you?

Little joke there. I often think the term cancel culture has been grossly misappropriated by a group of relatively very privileged people. Historically, cancel culture has been used against already marginalised groups and communities in order to silence them and keep them oppressed. Think about Section 28 and the devastating effects that had on the gay community. That, I believe, is actual cancel culture, where the government has used the law to limit an oppressed group’s right to free speech. Even today, look at the anti-protest laws our government has brought in so you can’t critique them.

Cancel culture is not all about some middle-aged, grumpy man complaining his twitter account got suspended. Also, who’s actually getting cancelled? Most of these people who decry cancel culture do so from their Netflix specials, their sold-out arena tours, their TV shows, their podcasts etc. If you’re ‘cancelled’, why do I keep seeing you everywhere? Gosh, it almost seems like declaring you’ve been cancelled is actually just great marketing at the expense of some already marginalised group, doesn’t it?

I do think I could fit right in with the Sugababes.

If it’s about writing a show for the Fringe, just write out the story you wanna tell as quickly as possible. Tell people that story over and over again, and each time you’ll get better at telling it. You’ll find more jokes, you’ll hit the right beats.

Also, it’d probably help if your dad just happens to be rich or famous. Or both.

You can see my show Cake at the Edinburgh Fringe at the Pleasance Courtyard, Aug 3rd-28th (Not 16th) at 9.50pm. Please for the love for the of god buy a ticket.

On all forms of social media that I’m too old to understand, I am @mrsamlake. Or go to my website, samlakecomedy.com 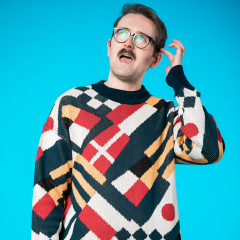 "I think it was out of spite? An ex-boyfriend thought he was funnier than me so I spent the last 7 years proving him wrong. And if that's the kind of effort I put into one-upping someone, imagine how much effort has gone into my show!"