We chat to writer and performer Brendan Murphy, who talks about his new show, the appeal of Edinburgh Festival Fringe, and provides a very detailed fantasy of a working relationship with Eddie Murphy.

Hi there, I’m Brendan Murphy. I’m a comedy writer & performer. You may recognise me as Producer Martin from ‘NonCensored’ the satirical weekly podcast I do with Rosie Holt & Eshaan Akbar. I’m the writer/performer behind ‘FRIEND (The One With Gunther)’ which won Best Play at the World Wide Comedy Awards 2021, and this year I’ll be taking on everyone’s favourite bleach blonde vampire… Spike, in ‘Buffy: ReVamped’ – a Buffy The Vampire Slayer parody comedy show currently on tour around the UK.

Seven seasons. 70 minutes. One Spike. The entire 144 episodes of cult 90s TV show, Buffy the Vampire Slayer, as told through the eyes of the one person who knows it inside out: Spike.

Satirical, funny and bursting with pop-culture references, it's the perfect parody for Buffy aficionados and those who never enrolled at Sunnydale High alike.

I’ve been coming back to the fringe every year since 2011 (even including last year’s weird mini-Fringe!) and it’s always been a real highlight in my performance calendar. The audiences are eager and open to trying new things, there’s a buzz in the air, the city (which is beautiful year round) comes into its own and there’s a real sense of magic on these old streets. You’re surrounded by the history of all the shows & performers that went before, while simultaneously getting a glimpse of comedy & theatre’s stars of tomorrow. That, and the Mosque Kitchen.

As the largest arts festival in the world, you can’t help but be in awe of its sheer scope and magnitude. You’re never more than 20m away from a good time. Pubs, Restaurants, Coffee shops, Galleries, each of which is hosting it’s own unique line-up of live music, theatre, comedy, dance, mime, podcasts – you name it. It’s all there, waiting for you to discover, and available at any time of day… for a whole month!

I’ve always enjoyed putting on a show. There’s a funny little agreement between a performer and an audience, a whole set of unspoken rules that aren’t ever really spelled out and yet we all instinctively understand. I was always impressed and intrigued by anyone who made me laugh. Tommy Cooper, Eddie Murphy, Jackie Chan... Regardless of the medium or genre, they brought a kind of magic into the room with them, and as soon as I saw that people could do that, I wanted in on it. Rik Mayall & Adrian Edmondson were a big influence, as was Monty Python & Blackadder, all the stuff my parents would allow me to watch with my brothers when I was growing up. By the time I started watching Jim Carrey movies I was hooked.

Coming from an Irish Catholic family, I was born and raised in Birmingham and received a state education before moving down to London. So naturally my artistic career has largely been focussed on intense feelings of guilt, shame and startling inadequacy! However, every now and then I just about manage to shake it all off by pretending that my parents weren’t school teachers at all, and were actually something really exciting like hedge fund managers! And that I didn’t live in the Midlands but I’m actually from somewhere great like *gestures wildly to the window* The South! If I’m lucky this lasts just long enough to write a comedy show, record a podcast or get cast in some kind of touring production. It’s amazing what you can do when you put your mind to it.

Three years old. Nursery. Won a fancy dress competition, dressed as a cowboy. Get in.

Radio DJ. Love a bit of music, love a bit of a chat. Not that bothered if people are listening or not. Dreamy.

Well, I didn’t really leave my living room for about a year and a half, so nowadays I tend to spend as much time outside as possible. I like writing in cafes, going for walks whenever possible and collaborating with friends - mainly as an excuse for us to hang out.

Yes. But only my art, and mine alone. Everyone else should have to deal with the consequences of their actions.

Eddie Murphy, circa 1996 - 2001. After a brief encounter while visiting the UK on a promo tour for The Nutty Professor (1996), Eddie would see a raw and unique talent in me. We’d quickly become firm friends and form a double act – The Murphy Bros. I was only 9 years old in 1996 but that wouldn’t matter because friendship conquers all. Eddie would take me on all the late night shows as his comedy sidekick, giving me some serious stage time but also showing me the ropes. After getting me a small part in Mulan (1998), I’d embark on my own lucrative solo career. Eddie would take this time apart to focus on creating the seminal Bowfinger (1999), after which we’d reunite to work on the script for Nutty Professor II: The Klumps (2000). Somewhat wowed by my work in the writers’ room, Eddie would encourage me to take a more hands-on role in the writing of future productions. And finally, after several middling successes, Eddie and I (The Murphy Bros™) would find ourselves in a room with three unassuming writers: William Steig, Ted Elliot and Terry Rosario. They’re asking us to come on board a brand new film about fairy tales. They want Eddie for a lead, but Eddie won’t play ball – not unless the other Murphy Bro is on the writing team. After a lot of back and forth between our agents a deal is struck. We get our way! Brendan Murphy is head writer on a brand new animated film that will go on to change the world as we know it. The name of that film? Shrek (2001).

You can do it! Believe in yourself! Don’t let anyone tell you otherwise! However, before you commit to making a show to the fringe, it’s important to ask yourself *why* you’re doing it. What do you want to achieve? What is it that you’re hoping to buy up there? It costs a lot of money and will take a great deal of work to make something worthwhile, so before you commit to going: make a list, be clear and precise, figure out just exactly what it’s going to take to make it happen, and then (if it all checks out and seems like the right decision) turn it into your passion for the rest of the year. And, crucially, enjoy it!

Buffy Revamped is on from 4th - 29th August at 7.30pm, taking place at The Pleasance at the EICC (Edinburgh International Conference Centre).

All the info is available at: www.buffyrevamped.co.uk

All the social medias: @BuffyRevamped (for the show) @NotMurphy (for the Brendan)

Buffy: Revamped is at The Pleasance at the EICC at 7:30pm from 4th – 29th August. For tickets go to www.edfringe.com 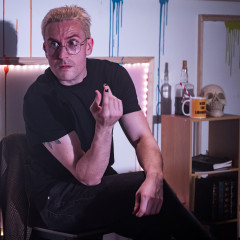 We chat to writer and performer Brendan Murphy, who talks about his new show, the appeal of Edinburgh Festival Fringe, and provides a very detailed fantasy of a working relationship with Eddie Murphy.