"I think the true all encompassing madness of it makes it special. It takes over the whole city 24 hours a day and that’s quite compelling in the way that a train crash or a gazelle being eaten by a lion is compelling."

I’m Jake, a stand up comedian from Stevenage. I was part of the Soho Theatre Young Company and the Penguin Random House Official Audiobook of the Fringe. I’m doing my debut show Sky at the Pleasance Courtyard.

A story about moving home to the suburbs interspersed with thoughtful observational stand up. It’s like an episode of Malcolm in the Middle (zany characters) crossed with a David Lynch film (lots of rats).

Because of the stress free format of the festival and abundance of cheap accommodation.

I think the true all encompassing madness of it makes it special. It takes over the whole city 24 hours a day and that’s quite compelling in the way that a train crash or a gazelle being eaten by a lion is compelling.

I got a Lee Evans stand up DVD for Christmas when I was a kid and that was it really. I lost my shit watching him and Peter Kay and I think that was what planted the seed. Simon Amstell in my teenage years and Kevin Bridges generally are people I think are incredible that I would love to emulate.

I went to the University of York and that had an impact on my artistic career as I met about 100 men named Hector or Oscar or Marcus and I learned key Rugby phrases that make normal people laugh when you do them in a kind of Tim Nice but Dim voice. Thanks lads.

Fucking hell bit deep. Honestly not sure. I have a vague memory of catching my Nan smoking and her saying it was to “warm her up” as it was cold. Maybe that?

Due to serious inefficiencies in the football scouting system of North Hertfordshire I never made it at an academy but if I wasn’t working at a grant making charitable organisation whilst doing semi confessional, semi observational stand up on the side I’d be playing centre mid for Stevenage.

Did Covid-19 change the way you create work? Do you approach shows with adifferent mentality now?

I subscribe to the idea that this is the most boring debate on earth being fought by the most tedious and worst dressed people on earth via the medium of the worst podcasts on earth in order, largely, to make money from sponsors that make nootropics and pillows.

If you could work with anybody, from any point in history, who would you pick andwhy?

Remember to enjoy it. Do it to feel the sensation of being on stage and making people laugh and don’t expect anything else.

I’m in Bunker 1 at the Pleasance Courtyard at 8.40pm

See Jake Farell: Sky at the Pleasance during the Edinburgh Festival Fringe from 3-28 August. For more information and tickets visit www.pleasance.co.uk  www.edfringe.com 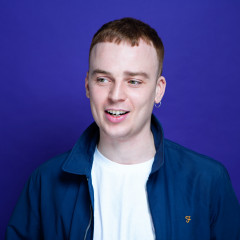 "I think the true all encompassing madness of it makes it special. It takes over the whole city 24 hours a day and that’s quite compelling in the way that a train crash or a gazelle being eaten by a lion is compelling."