Star of 'Allo 'Allo! talks to us about his departure from geography into acting, his love for Edinburgh Festival Fringe, and offers advice on what you should do if you want to take a show up.

A love letter to the golden age of British sitcoms, mixed with a touch of Miss Marple

It’s the biggest Arts Festival in the world, and the prospect of performing there, as one of 3000 shows, excites the heck out of me. I like challenges, and they don’t come much larger than doing a one-man-show at the Edinburgh Fringe.

The hugeness of it, mostly, but also its reputation for excellence and the sheer variety of genres available. “Something for everyone” is a cliché of course, but it’s absolutely true of the roster of performers and productions at Edinburgh.

It was performing as a Durham University student at the Edinburgh Fringe in 1975 and 1976, particularly a one man play, “Des Esseintes”, which was extremely well reviewed, that gave me the confidence that I could be a professional actor. I applied for a postgraduate drama school course as a result. But the original spark came from performing in school plays and realising I had a talent for comedy, which most others didn’t have.

My education at school and university both fostered, or at least help me realise those talents I possessed in acting. There was no history in either side of my family’s history of anyone becoming a professional actor, or any kind of artistic profession. My parents must have been concerned when I announced, as a Geography graduate, that I wanted to become an actor. But once I’d been accepted into a drama school, and subsequently began my profession life as an actor, they were always hugely supportive, which meant a great deal.

Sticking different coloured shapes on a large piece of paper at Nursery School. I must have used colouring books and crayons etc. at home before then, but it was the range of art materials: the paintbrushes, different coloured papers, and the smell of the paints and glues and papers are all locked in my memory.

Probably professional coaching, which I have done, particularly with young creative people. (I worked for 2 years on NESTA’s Creative Pioneer Programme as a coach and loved it.) I write anyway, so already doing that – but coaching is the only other thing that I truly love doing besides acting and writing.

I wasn’t really able to do acting work at all during Covid, so the difference in mentality now is that I approach acting work with huge gratitude. A lot of solitary thinking went on during Covid of how I wanted to live what Jane Fonda calls “the Third Act of life”. I’m grateful for that time to pause and think deeply and change whatever needed to change. Mostly I’m much more excited now – and hopefully better prepared than I sometimes was before.

On most ideas I try not to be fixed. I like to hear all sides of an “argument”. I find ‘cancel culture’ very upsetting. Brutal even. But I think that art is for everyone, no matter what their background or views. Art is a forum for ideas and the creative expression of those ideas. I don’t think that means “anything goes” though, because we must, within the forum, respect each other’s ethnicities, sexuality, political views etc.

I’d pick Lily Tomlin. I’ve been a fan since the 1960’s and was thrilled to see her Tony Award-winning one-woman show: “Signs of Intelligent Life in the Universe’ in Chicago in the late 1980’s. It demonstrated what energy is needed to perform a one person show. To me, she’s as good as it gets, and I could only learn from her.

“Wants” isn’t quite enough. “Has to”, “must” etc. are more active words to spur you on. Try and get a stash of money together to afford to go Edinburgh and see as much theatre in the genre you’re interested in as you can. Is your idea/production better than what you see there? Or does what you see there sharpen your creative muscles and inspire you further? Or alternatively: approach production companies who already know how to mount shows on the Edinburgh Fringe and see if they’ll take your production.  But I’d say still go to Edinburgh and see it all and be stoked up and knowledgeable. Also be professional. “Fringe” is often mistaken for “wacky” or “not professional”. It’s mostly neither of those things. Approach it all professionally.

Are You Being Murdered by David Semple is at the Pleasance EICC's Cromdale Theatre at 12:00 from 4th – 20th August. For tickets go to www.edfringe.com 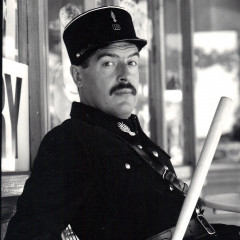 Star of 'Allo 'Allo! talks to us about his departure from geography into acting, his love for Edinburgh Festival Fringe, and offers advice on what you should do if you want to take a show up.