"The beauty of this is that for that period, in the microcosmos of the Fringe, it seems as if art really matters: performers and artists have a chance to be seen and to meet people from different countries and background, out of their comfort zone.

My name is Luca Cupani and I’m a comedian: I was born in Italy and eight years ago I moved to London, where I discovered the world of stand-up comedy and started my career. I perform mainly in English (in the UK and across Europe), but sometimes I also gig in Italy in Italian. Oh, and I have recently become a British citizen, so I would define myself as a Britalian Londoner :)

Storytelling, personal and dark in a funny way.

As hinted by the title (Happy Orphan), in the show there is a tiny bit of death, but it’s just about my mum and there’s nothing to be sad about, as I don’t miss her at all!

Because it is the biggest and best art festival in the world: it gives me the chance to be on stage for a month, meet many fellow performers from around the world and hopefully improve my skills. This will be my seventh time, the first since the pandemic happened and I look forward to enjoying the wonderful madness of the Fringe!

It’s a month long (someone would say that it is too long, and they might be right…) and the beauty of this is that for that period, in the microcosmos of the Fringe, it seems as if art really matters: performers and artists have a chance to be seen and to meet people from different countries and background, out of their comfort zone.

It started almost by accident. My initial plan was to become an actor, but when I moved to London I was told that my Italian accent didn't match my face (apparently I look Eastern European) and it was difficult to find acting jobs. Then a friend of mine suggested I should try comedy and told me that there were open mic nights where you could apply without any agent or connection. I googled "best open mic nights in London" and the first result was the Gong Show at the Comedy Store: I applied, got a slot, went there without knowing that it was also "the most brutal open mic night in London" and surprisingly I won it!

When I started, I didn't know much about stand-up comedy and I had never been to a comedy club, but when I was still in Italy, I enjoyed the humour of Woody Allen (before knowing how creepy he was) and the talent and energy of Robin Williams (I would love to have a career similar to his, with live shows and movies!).

For the best part of my life there was nothing artistic: I was raised Catholic (I still am) and after attending university (Classics and then a Master in Publishing) I started working as a freelance editor.

I wasn't happy though, mainly because I wasn't having a life: I lived with my parents till the age of 35, I was virgin until the age of 31 and didn't know what to do with my life.

If anything, the first 35 years of my life were a masterclass in facing boredom and a pointless existence and when I finally discovered my love for performing arts I was definitely hungry and ready!

When I was six I made a drawing, my paediatrician found it fascinating and my mum had it framed: it was a sort of crossover between a Christian Nativity,  Basquiat and a Rorschach test. But I haven't drawn anything else since and I'm really bad at visual arts.

I would probably be still in Italy, teaching history and literature in high school. Before moving to London I applied for a state job as a teacher: it was a nationwide selection, with written and oral exams. A year later (with the usual speed of Italian bureaucracy) I got a phone call, and I was told that I had passed the selection. But when they called me I was already in London, I had discovered comedy and I declined the offer: no regrets :)

During the lockdown I tried to increase my presence on social media, although I realised that I'm not very good at creating the sort of fast paced funny video that can better work on those platforms: I'm still trying, though!

But most of all I missed live shows, being on stage in front of a real audience and being able to connect with them. I won't take it for granted, and every time I perform I try to give 100%

I honestly don't think that there is such a thing as "cancel culture".

When we look at famous examples of "victims" of this supposed cancel culture, I don't see how they have been cancelled: Gone With The Wind is still available, but now there's a disclaimer (and rightly so) that explains that the movie "denies the horrors of slavery". Another "victim" of "cancel culture", Louis CK, has just won a Grammy and is selling out theatres after admitting having masturbated in front of up-and-coming comedians (whose careers have been heavily affected).

Another example is R Kelly: he's been sentenced to 30 years for sex trafficking crimes, but last time I've checked it is still possible to listen to his songs.

Billy Wilder! I would have loved to be directed by him in Some Like It Hot, maybe playing Jack Lemmon's role.

Make sure that you can see many shows (not just comedy) and be prepared to meet people from every part of the world!

Luca Cupani’s new stand-up show “Happy Orphan’ will be at the Just The Tonic Just The Spare Room at The Caves at 2.20pm for the month of August for tickets go to www.edfringe.com 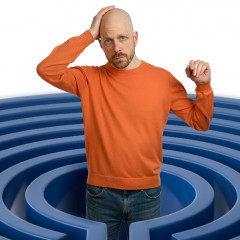 "The beauty of this is that for that period, in the microcosmos of the Fringe, it seems as if art really matters: performers and artists have a chance to be seen and to meet people from different countries and background, out of their comfort zone.