Hello! I'm Alison Spittle, I'm a stand-up comedian from Ireland, living in London. I've an empathetic gag reflex and a fear of sour milk that originated from watching Tarrant on TV at a very young age.

I do podcasts like Wheel of Misfortune, The Gargle and Guilty Feminist.

My best one yet. It's an arc of a few funny stories that sum up me and my attitude towards myself and others.

It's hard to pitch a show without being vague or listing off a list of topics in the hope that you the reader might come and see me. A big thing happened to me last year and changed my perspective on a lot of things, gosh that sounds vague too.

Because I want to be successful enough to appear on Pointless Celebrities and Richard Osman’s House of Games – in addition to the whole being a better comedian and growing as a person thing. I would like to answer questions on obscure Matt Damon films and choose mystic pizza or point out Skegness on a map.

It's sheer size and the feeling it can change your life.

So I worked for a radio DJ who does stand-up comedy, Bernard O'Shea. He told me to try stand-up and I did. The adrenalin and love I had for stand-up will never be matched, and that's why I don’t want children in case I don't feel what I felt walking off stage for the first time.

Ooooooh interesting. So I genuinely think I used to cut tension as a child by cracking jokes, I moved arounnd a lot so I developed a schtick, and the internet came into use when I was a child so I would look up rotton.com and communicate with vampire nonces in chat rooms, I think that shaped me in my humour.

Also, when I persued comedy in Dublin, my rent was, at the time, less than the dole and I think that is the sole reason why i could persue comedy fully. My landlord was Philip and he's a decent man who didn't gouge me.

Very specific but running down the cinema aisle in tears when Gaston plunged from the roof to his certain death. I knew he was a bad man, but I think I sensed he had low self-esteem and didn't deserve the finality of death.  I also remember vomiting up a strawberry lace from the pic n mix and having to pull it from my oesophagus, but I'm pretty sure that happened at a screening of Mrs Doubtfire. I'm sure the cinema people hated me.

I would be working as a producer, hopefully, in radio. Or maybe I would have had a grand realisation and work in sales for a vending machine company and get a drinking problem.

I approach shows differently because I moved to the UK and the whole calendar revolves around Edinburgh.

I've done shows but flew from Ireland and this time it's different. I like my show and the stories in it.

I'm thankful to be able to do it. When lockdown happened, I didn't feel like a real person because I based my whole identity on being a comedian, which is silly, so hopefully this time I approach things from a healthier perspective. I hope, but I probably will just look at reviews of myself and my peers and eat my feelings…

I think it was good?

Not sure, I'll try and think…

Any "controversial stand up" I've seen this year, I wouldn't decribe as art. Nor would I describe tweeting about it to be cancel culture.

Right wing comedians who say they're centerists will think I'm a wet blanket with that opinion but what can I do? I just don't think jokes are a licence to be a silly little fash-wad.

I really hope i'm getting the point accross that I don't  think about cancel culture and comedy, it's like fantasising about your own funeral. Be nice and don't hurt others, you only have one life don't make up perceived enemies in your head.

I would work with Jimmy Hoffa. Al Pacino played him in The Irishman and he seemed nice, he looked like he would grip your face in his hands and tell you you're a good person. I don't know what my role would be in the job while working with him, but I'd say it would be exciting to work in a union in the sixties and seventies. I'm struggling to remember the film, but he was the fifth name to pop into my head and to my knowledge he hasn't killed anybody. The first four names I thought of were all killers as I was thinking of history and history is full of atrocities.

I've given it a quick google and it looks like he didn't kill anyone, so I stick by it.

Gather your spices in a pill portion box and bring it with you to Edinburgh, and don't be an ass to people who work in your venue. Stay and extra day or two for the firework festival.

16.45, the Pleasance Attic in the Pleasance Courtyard, every day of the Fringe apart from the 9th, as I’m being a bridesmaid in Ireland that day

Alison Spittle’s new stand-up show ‘Wet’ will be at the Pleasance Courtyard Attic for the month of August for tickets go to www.edfringe.com 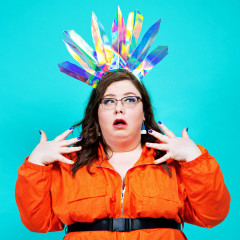