Voice MagInterviewsWhere Are They Now?.…

Dan is a Councillor, volunteer with the Fire Service, and freelance photographer.

I am currently doing a fair bit of freelance photography work throughout East Sussex, including: presentation events, conferences, charity events, and local new stories. I have worked on a number of local events for the local council, which get published locally. I have photographed conferences and events on behalf of East Sussex Fire and Rescue Service. I also work for a local estate agent photographing some of their properties on the market. I always have a camera with me, which means you can capture events as they happen; I captured the dramatic events of the Eastbourne Pier fire as it unfolded. For me I enjoy capturing detail and I love macro work especially around plants and flowers and when I get time visits gardens and RHS shows to photograph some of the best flowers around.

While photographing many local events I have been privileged to photograph some special events for a number of people, I have also attend many events people don't usually get access to which is quite a special feeling, I have also had to the chance to meet some wonderful people while doing this job. Everytime you see your work published, especially in print you get a quite an excited feeling.

How did you use your level of Arts Award to develop your creativity or skills?

I am fortunate to have completed all three levels of Arts Award, I used Bronze to open my eyes up to the arts world and gain some basic photographic skills to get me shooting images. I used Silver to try something new, so video production and made a short film "What Happens When You Call 999". Doing Gold firstly developed my skills in a much higher professional level such as wedding photography and also digital image editing. I also gained skills in event management and I successfully managed a community focused photography competition, which saw images produced into a calendar and sold for charity which raised over £1,000.

"What Happens When You Call 999". I wrote, filmed and edited a short film for the East Sussex Fire Service, documenting how they deal with a 999 call. I was the first person in this area to gain access to film such a documentary. The film was made in association with my Silver Arts Award and it was nominated for awards and screened at several filmmakers awarding bodies namely: The 'Leeds Young People Film festival' and 'The Co-operative Young Film Makers' Festival', was awarded 2 stars at the 'IAC British International' amateur film competition and won the 'Sound and Architect' film and media festival prize, which led to an invitation for me to have a private tour of the BBC South East and watch the live show from the studio gallery. After making this short film I stayed in contact with the fire service and since have photographed many of their events for them and I now also volunteer with them to deliver fire safety messages to the local community.

Firstly, choose the right Arts Award level for you. Use an art form that you are interested in to develop your skills, and if you commit to it you will achieve fantastic results and you don't know where it will take you.

In what ways, if any, would you say doing your Gold Arts Award helped your creative development?

I would say that Arts Award, and in particular Gold, has a bearing on what I am doing now and everything I have done since. For my Gold, I ran a local photography competition for local residents, where the images were judged and the twelve best were selection and put into a calendar. This was sponsored by a local business to cover some of the costs and sold in local shops. In the project I worked with a lot of local people. The first year was so successful I grew the project and ran it for 5 years and raised over £7,000 for local charities. I involved the local council to firstly host the information on their website, use their office as a drop of point and also space to judge. After attending some of their meetings I got interested in local issues and now serve the town as a councillor. I had some business with sponsors or selling outlets I have worked with regularly afterwards doing their corporate photography for them. I also built a number of contacts with the local press, which helped in getting my work published.

Can you show us/take us through what you did for your Gold portfolio?

I wanted to develop my photography skills to a higher level, so I worked with a local photographer to develop my camera skills but also my digital workflow process. I gained skills in using my camera to a more of a processional level my also gained skills skills in the importance of planning, pep and the process after taken the images. One of the main areas I also worked on is the digital editing process and the difference of taken images in jpeg and raws formats and the benefits when to comes to editing. The skills I gain using software Adobe Lightroom and InDesign proved invaluable and skills I now use them all the time.

For the wider arts sector research and review I spent some time working with a local photographer shadowing his work and finding out how he works professionally. I carried out a number of reviews and research into both local and world-known photographers and visited both the Eastbourne Town Art Gallery and the National Portrait Gallery. I also visited a local video camera club and gave a talk and presentation about my silver arts award and my film what happens when you call 999.

For forming a view I was luckily enough to work on "Some Truth about Youth" when The British Youth Council recruited ten young people to make a 40 minute documentary. The film focussed on the political movements and personal stories in which young people have been able to make a difference. As part of the film, we interviewed well-known politicians such as Peter Mandelson. Screenings of the documentary have taken place at the British Film Institute and at the BAFTA ceremony in London, along with being shown on the Community Channel and 1000 DVDs distributed to various schools and youth clubs in the UK. The film-makers scooped the accolade of 'Best Broadcast Created by Young People' in the Positive Images Awards.

What advice would you give young people doing their Golds now to help them get through it?

Doing Gold can take time depending on the project you set yourself, I took me two years while fitting it around other things, but stick with it as you don't know where it will take you afterwards! 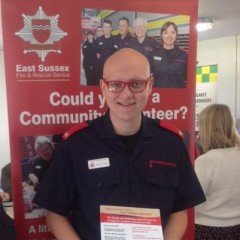 Where Are They Now?...with Dan Dunbar

Dan is a Councillor, volunteer with the Fire Service, and freelance photographer.