Dave Thomas is a director at Unit Twenty Three, but for many years he's been performing and establishing himself as an independent blues musician around the world. As an aspiring musician myself, as well as a nosey reporter, I decided to ask him some questions about his creative journey.

Where and when did you start your music journey?

In my hometown Baptist Chapel in Newport, South Wales. I sang hymns and was encouraged to sing as a very young child. It turned out that my mother had nine brothers who had all sung in a family male voice choir in the docks where they lived and worked. So I guess it's in the blood!

What are your early influences? How did you become interested in music?

Hymns and male voice choirs in Wales first. I responded emotionally to the melancholy in the harvest hymn We Plough The Fields And Scatter. My aunt Ev (who was a second mother to me) played the piano and our lodger Flo (who was like a grandmother to me) had a harmonium in her room. She'd been her chapel organist in a tiny hilltop village called King Coed. My uncle Charles bought me a harmonica and I taught myself to play it aged only 7. My dad had a lovely singing voice, but only sang in the bath. I heard Blues by Sonny Boy Williamson & Memphis Slim around the time the Beatles and the Rolling Stones were emerging but I was most directly influenced by those black American artists because the way they sang and played sounded and felt like their own true life experience.

What is it like to be an independent musician?

Being an independent musician is good. I play and write the music that I believe in, regardless of any commercial pressure. For me music remains central to my life's journey.

How do you remain financially stable?

Remaining financially stable is difficult. Blues musicians rarely earn much money. Most rely on the day job or other part time work to make a living. For over 25 years I had a career in direct marketing and advertising. My income now comes mainly from pensions but, obviously, I supplement that income with work for Unit Twenty Three (youth training), live gigs, some teaching and a little from record sales, CDs and digital downloads.

How did you get signed?

I was 'discovered' first at the age of 17 by United Artists. A BBC DJ called Stewart Henry heard me sing with a blues band called The Deep in Bristol in 1968. That band played that year at the Shepton Mallet Festival, the forerunner to Glastonbury. In the end, I didn't sign with United Artists. In 1969 I joined a seminal progressive rock band called Blonde On Blonde who were already signed to Pye. We were offered new contracts for their second album Rebirth, which I sang on, by Pye, CBS and Ember Records. We signed to Ember. I also wrote, played and sang on Blonde On Blonde's third and last album Reflections On A Life. The band played at two Isle Of Wight Festivals supporting Bob Dylan and Jimi Hendrix (1968 and 1969 I think...or 69 & 70?). I didn't sing at the Isle Of Wight but Blonde On Blonde did top the bill at a festival in Keighley supported by Fleetwood Mac!

Now I have my own record label: Blonde On Blonde records and I'm also a share-holding director of KrossBorder Records (a blues/blues rock label).

What is your approach to creating an album?

No one approach to making an album. They're like babies and arrive when they are ready. My first solo album took over 30 years to finish and release. My next album will have taken over 40 years to release BUT, in the meantime, I have released albums that have taken one day, 2 hours and less!

What advice would you give to young people looking to pursue a career in music?

Be clear about your objective. If it's for a full time career, study law or music. If it's because music is the expression of your soul just listen, learn, sing, play and write...and get the day job!

Want to know more about how to make it as a musician? Check out Creative Choices, the arts careers website: https://ccskills.org.uk/careers/advice/article/music-performer 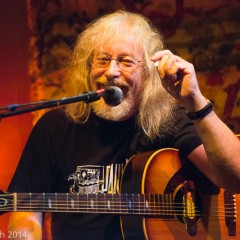 Dave Thomas is a director at Unit Twenty Three, but for many years he's been performing and establishing himself as an independent blues musician around the world. As an aspiring musician myself, as well as a nosey reporter, I decided to ask him some questions about his creative journey.