Sharon Gaffka is perhaps best known for her appearance on last year’s summer season of Love Island. What is less known is that she has since been using her platform to champion causes like anti-racism, and we talk to her about this.

First of all, I would just like to thank you for taking some time to have a chat with me today! Before we delve into the excellent work you’re doing as a Young Women’s Trust Ambassador, could you tell us a bit about your ethnic heritage and how this affects your day-to-day life?

Absolutely, so I’m actually mixed race, in that my mother’s Indonesian and father’s Polish and English. There’s certain days where it impacts me more than others but I do feel it in dating and back in school – perhaps there’s more of an emphasis on looks in dating and when you’re a young adult.

Now I know you’re probably sick of talking about it but I would be remiss if I didn’t ask you about Love Island. As part of my research I read that scenes discussing race were cut from the show which I can imagine was very frustrating for you. Why do you think these important conversations on race don’t seem to be given their air time on TV?

Ultimately, I think it’s because people tune in more so for the drama than they do heavier conversations. In fact, I’ve had people tell me that they don’t want to see political correctness when they do watch TV. That’s certainly something that I can appreciate, but race is a part of dating whether you like that or not, and the scene in question was just contemplating that rather than some sort of rant on race in the UK. So, I understand why it was cut but it’s still important.

What were your experiences with racism / conformity like both before and after you found fame?

That’s a tough one… I think it has and hasn’t changed.

I do feel it’s changed in the sense of where it’s come from and the sort of things that are now said to me.

Before Love Island, it was more so hyper-sexualisation and fetishisation, particularly with dating. Asian women are portrayed as being submissive and willing to please men so I would get questions like “are you a banana?” (Asian outside but White inside).

After Love Island, it has become more superficial and now focused on my physical appearance instead. My eyes for example are frequently commented on because I’ve got that heritage in me from Indonesia, so I have to call people out on their racism in those cases.

When I speak to friends of mine who are mixed race some feel they don’t fit in with either side. Given that you’ve got a mixed heritage yourself is this something that you’ve experienced yourself?

I feel the conflict comes in conforming with the beauty standards that are perpetuated by these cultures. In this sense, it’s difficult for me to conform with my father’s heritage as I’m not a stereotypically looking European – blonde hair, blue eyes and that sort of thing.

My mother’s side is easier to conform with in that sense because I have fairer skin and I’m relatively tall. Thankfully, there hasn’t been too much direct conflict in my experience but it’s more apparent with each culture’s relative beauty standards.

What I sometimes find frustrating is that people deny that racism is a big problem here in the UK. What is your opinion on this and what changes would you like to see to improve the situation within the country?

Racism here is not necessarily overt in the sense of being called racial slurs walking down the street. What I think people fail to realise though is that doesn’t necessarily mean that it’s not a prevalent issue. What’s frustrating for me is I get accused of discussing race because I’m trying to keep myself relevant – I’ve been talking about race well before and will continue to do so well after Love Island.

Covid-19’s for Asians has been an absolute nightmare in that it has perpetuated very negative ideas. Unfortunately, there is some media attention on this but certainly not enough given the big community of Asians in Britain.

After Love Island, I respect the fact that you’ve been using your platform for the greater good. You’re an ardent feminist, transparent about sexuality and also spoken about the issue of race - what motivated you into advocating these causes?

Sure, so I’ve been involved in cancer awareness programmes with both the NHS and Boots Pharmacy. Now, I’m trying to raise awareness on the issue of drink spiking and have been working closely with the government!

I’m sure you’re already well aware of them all but Sharon’s social media links can all be found below! 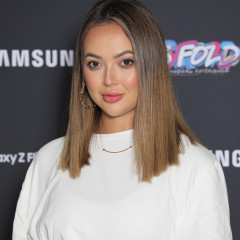 Sharon Gaffka is perhaps best known for her appearance on last year’s summer season of Love Island. What is less known is that she has since been using her platform to champion causes like anti-racism, and we talk to her about this.