When the weather is cold, the fire is burning and you've had too many mince pies, what better winter activity than to curl up with a festive read? Turn off the TV and pick up on of these Christmassy books, all you need to do is make the hot chocolate!

A Christmas Carol by Charles Dickens

The ultimate Christmas classic. You've probably seen at least one adaptation but why not take a look at Dickens' original depiction of Scrooge? Christmas as we now know it comes from the traditions established in the Victorian period, so like Scrooge, take a trip back in time this festive season.

Mog the adorable clumsy cat who gets caught in disaster on Christmas day, stole the show in this year's Christmas advert battle. Channel your inner child this Christmas with Mog!

How the Grinch stole Christmas by Dr. Seuss

Dr. Suess's books are far from simple children's stories; often featuring wider social commentary, and incredibly clever poetic wordplay. Whether you love the film, are a bit of a Grinch yourself, or you want to dig beneath the consumerism to discover the real meaning of Christmas, this is the book for you.

The Adventure of the Christmas Pudding by Agatha Christie

Murder mysteries go with Christmas like turkey and stuffing. And who does murder mystery better than Agatha Christie? See your favourite detectives Miss Marple and Hercule Poirot in some festive thrillers sure to entertain.

The Hogfather by Terry Pratchett

If you want an alternative Christmas story Terry Pratchett's The Hogfather is fantasy's answer to Santa Claus, until he can no longer do the job. So what happens when Death steps in?

If poetry is more your thing then see Poet Laureate Carol Ann Duffy's beautifully illustrated tale written specially for this Christmas. Check you previous years' work too if you like this!

The Lion the Witch and the Wardrobe

It's 'always winter but never Christmas' – there couldn't be anything worse! So follow four children and Aslan the Lion in their quest to defeat the White Witch.

The Life and Adventures of Santa Claus by L. Frank Baum

If you are more of a traditionalist why not read all about old St Nick with stories from the man who brought us The Wizard of Oz. The perfect Christmas Eve read while you are waiting for Santa to come!

The Nutcracker and the Mouse King E.T.A Hoffman

The ultimate Christmas fairy-tale about a toy come to life. Read the original by E. T. A. Hoffman for a darker exploration of children's dreams which inspired the famous ballet.

If you are looking for laughs this Christmas then look no further than John Grisham's festive comedy which inspired the movie Christmas with the Kranks. When Luther and Nora decide to skip Christmas, their family has other plans; cue Christmas chaos!

Whichever read you choose, enjoy the festive fun and have a very Merry Christmas! 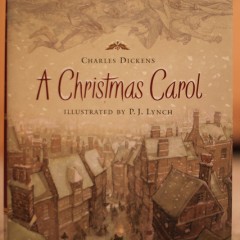 When the weather is cold, the fire is burning and you've had too many mince pies, what better winter activity than to curl up with a festive read? Turn off the TV and pick up on of these Christmassy books, all you need to do is make the hot chocolate!