A future innovative leader, this "savvy micro-human" is an inspiration for us all

In an social environment that is keen to paint young people in a negative light, it is so inspiring to meet the next generation of society who challenge that stereotype. I had the privilege of talking to one such child today, Femi Owolade-Coombes.

Femi is an incredibly switched on child, passionate about mathematics, coding and music. Femi is not just computer minded however. His talents extend to music as well - learning to play cello, piano and guitar and able to sightread music.

This is his first time at Mozfest and he also holds the prestigious title of youngest workshop facilitator here at Mozfest - running a session on physical computing with Raspberry Pi.

Self driven and supported by his mum Grace, Femi has made a name for himself in the coding world by running Raspberry Jams. These, for those not in the know, are sessions where people get to play with the very popular, very versatile, and very cheap computers called Raspberry Pi. He writes a weekly blog over at hackerfemo.com, and has even started receiving review units.

Femi is very keen to ensure his sessions are accessible and inclusive. As somebody who has Tourettes, he is aware of the importance of offering as many opportunities as possible. I was told that 50% of participants in his jam were Autism and Tourette's Syndrome families.

Osper, a mobile banking app for children, was so impressed with the work that Femi and Grace were doing that they funded the purchasing of mobile workstations, perfect for tourette sufferers whose ticks may make working in a closed, cramped environment somewhat challenging. It also allows the sharp minded prepubescent to deliver his workshops in places that don't have computers, thereby further enhancing the accessibility of computing. In addition to this, Femi's work has received the attention and support of Tourettes Action and Ambition and Autism.

I spoke to Dorine Flies, wrangler of the Youth Zone at Mozilla Festival, and it turns out she personally invited Femi, "because I think Femi's cool".

Sensing this was perhaps not validation enough - I felt it was, personally - Dorine continued:

"I love his passion and i love his geekiness. I love the passion of his mum in supporting him in his passion. Adults and children can collaborate of their passions. We need to choose to share our passions with our children."

"Our young people need to see that people value what they care about. Femi represents tomorrow. He is an engineer of tomorrow. If I don't show him that I care, why should he care about me."

"Peer to peer is really powerful", and with Femi leading workshops, Dorine hopes that he may help to inspire another child to become an engineer, or embrace their passion.

I also spent some time talking to Grace, and it was apparent that she was incredibly proud of her son's achievements, and rightly so. It was also clear where Femi got his confidence from. She exudes energy and charisma, and is fantastic at getting people stuck in. I went to her for a quick question and ended up working at a station attempting to code an LED on a Raspberry Pi, and not 100% sure how it happened. She is a natural go-getter, and is installing the same attitudes in Femi.

Grace did say it was difficult to balance all the different aspects in Femi's life. It would be quite easy to get completely absorbed entirely in the computing elements, or indeed the music. Similarly, Femi's penchant for maths could and almost certainly will take him far in life. When asked if there was anything he didn't do, Femi jokingly replied "homework". That reinforced how he was just a child, and has many of the same aversions as attitudes as any other nine year old. This in turn made everything he has achieved all the more insane.

I found it almost daunting to be talking to a nine year old who has more knowledge than I in such a vital area of modern life. I was 11 when he was born, but in less than a decade on Earth, he has acquired the skills to make software and hardware talk to one another, and is competent enough to teach others. I genuinely am excited to see what Femi ends up doing with his life, as I know that he will excel in whatever he puts his mind to.

Below is a quick interview I had with Femi in one of the few quieter moments of Mozfest. 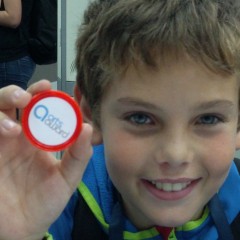 A future innovative leader, this "savvy micro-human" is an inspiration for us all