This year's Lumiere festival in Durham will feature an installation called 'Precious' created by Media Studies students from Durham Sixth Form Centre in collaboration with New Zealand company Storybox. Ellen Orange speaks to some of the students involved in the project to find out more.

Lumiere is a festival of light, which features light-based art installations across the city. Kicking off in Durham next week, the festival has collaborated with students from the Sixth Form Centre.

This year, Lumiere has been commissioned by Durham City Council for the fourth time and will feature an installation named 'Precious', in which artists from New Zealand company Storybox have been working with media students from Durham Sixth Form Centre to create films that will be projected at the event. I spoke to students Martin Shore, Ciaran Balletta, Jack Caswell, Natalie Danson and Aisha Barker to find out more about the project.

Can you tell me about the project?

Martin: We got approached by two artists from New Zealand, Rob and Jess [from Storybox], and their idea was to get a real sense of the root of people's lives in Durham. The whole project is about people discussing the most precious object in their life. It's very diverse, a sort of cultural heritage.

Ciaran: We've had a few instruments, a bicycle, a surfboard, a bible, something that came from a volcano…

Jack: The process itself consisted of three separate parts, the first part was people coming in and we introduced them and talked through the process. Then we took them into the second room for different camera angles and the artistic shots. Then we brought them into the third room where we had the interviewer talking to the person about their object.

Who did you interview?

C: Usually the older generations since they have more life to talk about.

J: I asked my grandad to participate and he brought in his gold watch passed down from his grandad who fought in the First World War. It was a medal and watch he got for an act where he saved lives, it was the second below the Victoria Cross. He explained to us why it was important to him and what was he going to do with the object after he passes on.

M: I did the test one and used my teddy bear, and you definitely get the disparity between that one, and watching someone who is 70 talking about a memento of their entire life. I think you get the same emotion as to why I am attached to my teddy bear, it's the only one I still have, but there is so much more story behind the things that have been passed on.

What is the most interesting story you have heard?

Natalie: You get to see how people show their emotions when they talk about something special. There was the lady who bought a harp and she got it because she couldn't ride her horse again, so she got the harp and made a song for it and she got emotional in the interview talking about what had happened.

Aisha: The person I interviewed had an accordion. It was a memory of his mum as she taught him how to sing and he had to sell an accordion, so he bought one later in life and learnt it again to do something for his mum.

C: For me it was the differences between people's stories. For some people it's sentiment and memory, and for others it's purpose. We had someone with binoculars. It wasn't sentimental at all, purely for purpose because their hobby was bird-watching, that's what I found interesting.

What have you learned from the experience?

J: I never interviewed anyone before so it was a new experience to develop those social skills and interview people; the ability to talk to people.

N: I was working as the digitalist so I had to make sure I had all the SD cards were clean in time for the next interview. We had to work under pressure so they could get on with interviewing. It's helped us all working to professional standards.

M: Working on a professional project for the first time because everything we have done so far are student films but this is a massive display.

What have you enjoyed most?

N: Finding out what is important to other people.

M: I think it was interesting because we had some teachers and relatives, especially if you knew the person you were talking to, finding this completely different side to them.

A: I like the more technical side of using the equipment which we have never used before. It has also helped us understand the industry a bit more, there were people from Artichoke and also people filming us so we got tips from them.

Is this something that you want to do in the future?

A: I want to do TV production, using the cameras.

J: It's a great experience for film production, to see what it's going to be like; the environment you'll be working in.

N: I am thinking about script-writing so it was interesting to watch the stories and a good experience so you can get to learn the kind of thing you might want to apply to scripts and characters.

What objects would you choose?

A: It seems like our generation would say a phone or a laptop, but I've got things from my grandma, like a bracelet with the charms, so she collected them over lots of years then passed it on to me

N: I'd say the necklace I am wearing now, I wear it every day. My dad got it for my 16th birthday. It's St Christopher so it's to protect people…when I wear it, it makes me feel special.

J: It's a bit nerdy, it's a Dr Who coin collection that me and my grandad did. It was a collection we just did as a silly thing but it's something we had in common and we could share.

C: Mine is my harmonica, I've only had it since March but it's my favourite thing because I am loving learning to play it.

M: If we got a chance to do something similar to this I would go with younger people because although older people have a lot of history we can have just as much of an emotional reaction to people and things. 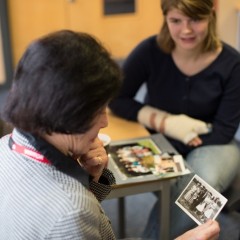 This year's Lumiere festival in Durham will feature an installation called 'Precious' created by Media Studies students from Durham Sixth Form Centre in collaboration with New Zealand company Storybox. Ellen Orange speaks to some of the students involved in the project to find out more. 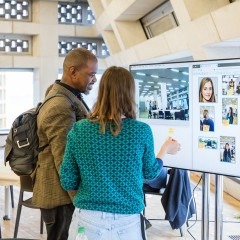 Uni To Unicorns With Digital Maker Collective And UAL