Inspired by her working-class roots and the northern industrial town she grew up in, we talk to artist Jenny Mckimm about her most recent work, and what it is like to be a young artist in London.

Jenny Mckimm is a London based, Staffordshire bred artist whose most recent exhibition ‘The Mill’ caught my interest. Her installation, a symbol of the de-industrialisation of England, comprises three different mediums: a chair and rubble fixture, a poem and a film. Digital images of the film were then made into prints with extracts from her poem integrated within them, which she now sells individually.

As part of her degree show, ‘The Mill’ was exhibited at Wimbledon College of Arts in London. She soon fell in with the Working Class Creatives Database where she got to exhibit her work in their ‘pure class’ show. It was here she met the curator of Stour Galleries, who offered to exhibit her poem in their café. Speaking to Jenny I uncovered the meanings behind the piece and the struggles of being a northern working-class artist in the big smoke.

What was the motivation behind your creation of ‘The Mill’?

After living in London I was trying to figure out my own identity within my hometown of Leek. It is a predominantly working-class area full of these abandoned mills that were once used for silk making. I was really inspired by the north/south divide and how this northern symbol of the mill is a symbol of the working-class. The way they have been left to ruin also represents how the working-class in this part of the world are still being ignored.

So how did you go about turning these ideas into a multi-medium art installation?

It was all done on computers – none of it by hand. By doing it all digitally I’m showing that I myself as an artist [am] replaceable, which reflects society’s view of the worker in general. The chair hanging by rope threatens destruction and the rubble represents what is destroyed, linking to this image of the mills in ruins.

You then walk into the film, called ‘Fordism’. You are in the dark and are shown a one-minute long collage of images of the industrial landscape of Leek, played on repeat. I collaborated with non-artists from the north and asked them to film parts of their industrial town, which are incorporated into my film alongside images of Leek. Black and white images are fused with vivid colours, giving it an unrealistic quality. In the background, there is this sound of machinery playing, and you really feel these ghosts of an abandoned place. This distorted imagery alongside the sound of machinery removes all that is natural, contributing to this idea of industry.

And the poem? How does that tie in with the whole installation?

It is presented first, almost like a warning of the political destruction ahead, which the film shows. The poem explores my place in this town, whilst referencing the industrial history and the political implications of the de-industrialisation of the north. Again the text is typed up and printed onto this two-metre-long cheap fabric which further promotes this idea of the replaceable artist. But it is also symbolic of the textile industry. There’s this old church near these mills called the ragged school, have you heard of it?

No, I can picture it, but what was it?

So it was basically a school for the children who worked in the mills. It was the only place they could go because they had to work all day. They would go straight from work, in their rags which is why it is called the ragged school. I think it's been converted into apartments now. Using the cheap fabric to display the poem is also a reference to this history.

Oh, I didn’t know about that. So, how was the process of getting this installed, were there any problems?

Yeah, so I had about a week to set it up, with two other people helping out. At the time there were builders at my uni because fine art, my course, was being destroyed in order to make way for a new acting department. Funnily enough. the builders were really helpful because I needed wheelbarrows to bring my bricks in for my rubble installation.

That sounds stressful. You then managed to show the exhibition at the ‘pure class’ show run by the WCCD. Who are they?

The Working Class Creatives Database helps people from working-class backgrounds to get into the arts. It's a great community for people like me, offering support to enter an inaccessible art world. It makes things like networking easier and gives us the opportunity to have our work showcased in galleries, for example, the ‘pure class’ show.

What was their response to your work, and how did it feel to see your work in an exhibition?

I had a positive reception from other members of the database, people saying it reminded them of their own personal experiences. Of course, you’re worried if people class this sort of thing as art, but I felt people liked it. Jeremy Corbyn also came to the exhibition, which was an amazing moment, and it was great to see him support working-class people in the arts.

I’m so jealous about that, but I’m glad you had a good showing. You seem to have great support from WCCD, but what struggles do you find day-to-day?

Being a northern artist in London is difficult. People come from a very different world to you and have more opportunities. For example, I can only afford to work from home, which means working in a tiny bedroom and having to do most of my work online, whereas more affluent people can afford bigger workspaces, hiring out whole studios and buying expensive materials. Also throughout my degree, I had to work alongside my studies. This impacted the time I could spend on my artwork, whereas people who do not have to worry about finances had all the time in the world to work on their pieces.

I suppose the pandemic didn’t help matters either. How did lockdown impact your artwork?

Closures meant it was difficult to access art. Going to a gallery gives you so much inspiration, and not having that limits your creativity. Also, my room was quite small, so like I said I could only really complete work on computers, whereas some people have bigger homes with their own studio. Covid really emphasised the class divide for artists. We had a suite that we got discounted from the university, but being locked down stopped access to that.

Looking ahead, have you got any new projects on the horizon?

I’m hoping to do something based around my hometown of Leek again. This time I want to explore the folklore of the district, using these stories and looking at them from a feminist angle. Blakemere pond or the ‘mermaid pool’ has an interesting mythology as it is said to be haunted.

The story is about a young woman who rejected a man’s advances, and his response was to accuse her of being a witch. He tried to drown her and as he did she muttered a curse. Apparently, a few days later his body was found in the pool. People are scared to swim there in case they see her, and she has been known to pop up when the pool has been threatened to be drained.

It's very Angela Carter-esq, and to do some kind of artwork around that would be great.

It seems you draw a lot of inspiration from your hometown, and I can’t wait to see what you do next. It's been really nice talking to you Jenny, thank you for giving me an insight into what it is like to be a young, working-class artist.

No worries, it was great talking to you too! 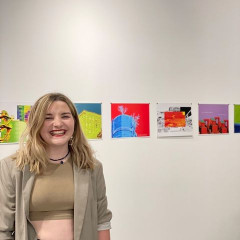 Inspired by her working-class roots and the northern industrial town she grew up in, we talk to artist Jenny Mckimm about her most recent work, and what it is like to be a young artist in London.