Hollie McNish is a critically acclaimed poet and spoken word artist. Benjamin Zephaniah once said, "I can't take my ears off her"

I've been lucky enough to interview one of my favourite poets on all things spoken word, Hollie McNish: 2009 UK Slam Poetry Champion.

I hear you're currently training to be an Arts Award adviser, what attracted you to Arts Award?

I think it's a great way for young people to get a qualification from what they're doing. I work with loads of schools and youth clubs and the young people I work with always do such cool and amazing work and I just wanted them to get awarded for that, the way they would with work they did in class.

How did you get into spoken word?

My boyfriend pushed me into it! I've written poems since I was a kid and all my diaries are in poems and rhymes and I only ever read them out to my mum. Then when I was 23 I met my current partner and I read them to him. He told me I should read them to other people. I said no way. He told me I should again. I said no. The idea of reading them to strangers was horrible. But I got annoyed with myself for being too scared to do it. Then I went to the Poetry Café in Covent Garden the next year and watched some poets. Then I finally did it myself and signed up to their open mic. After that, I got asked by people to read at their events and then that just carried on. And now I've quit my other job to do poetry full time!

What is it like to perform in different settings, such as at festivals or on YouTube? How do you find the different audiences?

Audiences are generally lush! Sometimes I've been heckled, but nothing too bad! Some festivals I love, others are hard. I love performing at Shambala Wandering Word stage – it's the best one I think - or Latitude's Poetry Stage. Some festivals though, especially later, when audiences might be a bit drunker than normal – it's harder!! I like reading my poems on youtube because it means people can use them in schools / youth clubs / events when I can't get there myself. That's why I put them up – cos I couldn't get to lots of places so I thought at least then they can be used. I can also wear my pyjamas to film them cos you can only see my top half!! Youtube gets me a lot of hate mail, a lot of aggressive people, threats and lots and lots of comments telling me I'm ugly or stupid or whatever. But I don't care about that. I like reading the comments to know what people think about the poems – if they just want to talk about how I look, I don't read cos it has nothing to do with the poems!

Where are you most looking forward to performing this year?

Jeez, there are loads of things I'm looking forward to. I like performing at conferences because people are really excited to hear some poetry when they've been listening to lectures all day! I can't wait to perform at Latitude with Bang Said the Gun – the gig is 11pm in the poetry tent and we are performing in a boxing ring!! I also love performing in Scotland and I'll be there in June, July and August – Glasgow then Edinburgh. I love it because the gigs are really exciting and my family are Scottish so I get to see my grans and cousins and aunts and uncles! I might be going to Bali – but that's a big if. If I do, I will be so excited I might pop!

What has been the highlight of your career so far?

These are hard questions!! I think possibly recording and performing at Abbey Road Studios, where the Beatles recorded. My daughter also recorded bits of one of the poems (she's 3), which was so funny! But when I performed, I saw one of my closest mates was there – a friend I've known since we were 5. I couldn't help but cry. So I was on stage, crying and forgot my words!!! But it was still really great to do it! I also worked with a group of teenage girls for the last year and I've loved doing that – they are amazing and funny and keep me on my toes too.

In your piece 'Mathematics' you say you 'geek out over calculus' and in 'Language Learning' we see your flair for other languages. What did you study before getting into the spoken word?

Basically those two things!! I was quite a geek at school, did all my work and then played sport most Saturdays. I did French, German and Maths at A-level, then studied French and German at King's College in Cambridge for my degree. I then changed after that and did a Masters in London part time in Development Studies with Economics, which was basically studying lots to do with human rights, migration and the economics of trade and loads of different stuff! I was working part time and studying part time then. I never thought I would be doing poetry for a job. It wasn't planned in any way!

Your poems are all very passionate, both in delivery and content, have you ever had to force a piece?

No. I'm not an actress. I was never in the school plays or anything. I just write poems about things I write about and then read some of them out. It depends on my mood that day too. Like, after I got UKIP's leaflet through the door I probably read Mathematics out more angrily. Other days, I might feel calmer or more saddened by things. Or happier. It just depends on all that. But I just read them out really.

What advice would you give to young people interested in performance poetry?

Go to the Apples and Snakes website – they are the UK's top info point for Spoken Word. Also the Poetry Society who run a youth Poetry Slam Slambassadors. Go to events and watch some poetry – or check out stuff on youtube. The main thing if you're writing I think is to start sharing your poetry with people – actual real life people – friends / family / poetry groups / open mics. Don't start by putting stuff on youtube / soundcloud etc if you ask me as people online can say whatever they want. They can be cruel, can be rude and pretty unhelpful. But it's your choice! I only put things on youtube after about 2 years of doing gigs.

Where can we find you online?

Any final messages to our readers?

Keep doing what you love. Work hard. Be nice to people. Don't listen to those who put you down for no reason.

Check out one of her works 'Famous For What'... 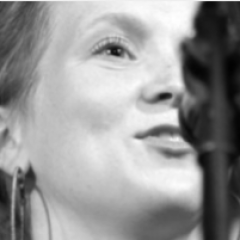 Hollie McNish is a critically acclaimed poet and spoken word artist. Benjamin Zephaniah once said, "I can't take my ears off her"