We caught up to chat about age perceptions, personal subject matter and the biggest challenges she faces.

How long have you been making films for?

Ever since I can remember, maybe four or five years old, but I released my first film onto YouTube, "My Little Sister (who happens to have Down's syndrome) Episode " when I was 8.

What first made you want to make films?

I used to love making things come to life, I started with drawing animations, animating my toys and making them talk when I was about five. I liked to film myself telling stories that I'd made up as I went about the house. It became a habit to start putting my views across as I filmed, as commentary over footage I was taking (often secretly) of my family, friends, pets and about where I lived. I love making documentaries about the everyday things I come across, when you look in close up detail at something it takes on its' own life and holds all sorts of unexpected feelings.

In 'My Little Sister (who happens to have Down's syndrome) you deal with very personal subject matter, do you find film making a cathartic exercise?

I wouldn't say cathartic, I just love using film creatively as art and as a way of sharing ideas, thoughts and feelings.

I find it a really exciting media to work with that combines art, writing, music, and research.

Many young people hold back from making serious artwork because they don't feel like they'll be taken seriously. What advice would you give to other creatives in your age group?

My advice is if you love something then do it, and don't hold back! Don't worry about what you think other people might think. I had no idea that when I started making films about 'My Little Sister...' that I would get other people my age contacting me from all over the world, enjoying and being inspired by my films. Never follow the crowd, always speak out for yourself about stuff that means something to you.

You were home schooled, do you think this has allowed you to be more creative with your output than in a traditional school?

Definitely, it allows me to focus on my filmmaking and creative skills as much as I want. I am home educated in a way where I am supported to increase my knowledge about things I'm interested in, follow through my ideas and make them happen by completing projects. I am trusted to find things out for myself and so I can learn what I want to learn at my own speed in my own way. This means I can just get on with it, without the frustration of waiting for the next step! I love having an idea and then teaching myself what I need to learn to make it happen, its an exciting process and great as I often learn things that I didn't expect to along the way. I have taught myself everything I know about filmmaking through trail and error, talking to people, reading and online tutorials. Also the great thing about the way we are home educated is that we live in the country and I spend at least half of my time outside, doing tumbling and walking, I get loads of my ideas when I'm outside.

What's the best thing about being a young creative?

You have so much more time to carry on doing what you love to do! I love getting on and doing what I love doing now, not being told that I will have to wait until I leave school, or grow up. I have ideas and I love to make them happen. As well as making all sorts of different films, this year I'm hoping to get some of my written work published.

What's the biggest challenge about being a young creative?

Sometimes you don't get the recognition that an adult would. Sometimes people think because you are a child you haven't worked hard to make your art, which of course is rubbish, to be good at anything you have to put the hours in. Getting the right kind of mentoring and technical support, especially with computers is an ongoing struggle. Financing the equipment for film making is a huge challenge, I have dog walked for two years just to buy the memory it took to make the last film, which jumped from ten minutes to 44 minutes!

How has Arts Award helped you with your work?

It helped me to be more articulate about what I was doing and made me explore new areas of my art form. Agi K filmclub that I set up during the Arts Award has been running successfully since then, I have loads of fun leading the group, teaching film skills and making group films.

You can visit Agi K's website here, and can access her videos on Vimeo on Demand here.

Don't forget, you can read more about the Gold Arts Award. 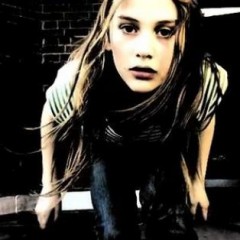