Garth Jennings has worked in both film and publishing, directing such classics as The Hitchhiker's Guide to the Galaxy and signing a three book deal with Macmillan Children's books. This weekend, he could be found at Bath Children's Literature Festival...

What is your current job title, and what does that entail?

At this moment in time I am a writer and film director. I'm the writer of an animated movie I am directing for Illumination. They are the team who invented Despicable Me. Although their head office is in Los Angeles, all the animation is created in studios located just a few steps from The Eiffel Tower. My movie is still a secret project but I can tell you that my job is spent with my ever expanding team of animators, designers, artists and actors who are bringing my movie to life in the most extraordinary way. As both writer and director it is my job to steer the movie towards a final result that is so unbelievably fantastic you will leave the cinema changed for the better. It's a crazy job but I love it. And the restaurants around here are great!

You've worked on a broad range of projects, covering film and literature - do you feel more at home in any one area?

I feel most at home on a film set, specifically sitting on the camera dolly with a cup of coffee and watching something magical happen right in front of the camera. That's a wonderful place to be. But I honestly love all aspects of storytelling. Even making all those music videos felt like storytelling. I usually find writing very hard work indeed, but for some reason I just have to do it. Writing The Deadly Seven was both the hardest thing I've ever done and one of the most rewarding. I adore Nelson and his monsters and I cannot wait to finish their journey. If it turns out anything like what I have in mind it should be very exciting.

Which piece of work have you been the proudest of?

Son of Rambow is a movie I am extremely proud of. But then again, holding the final copy of The Deadly Seven takes some beating. There's more to come and a new movie too so I'm sure my answer will change in the next year or so…

When did you decide to make a move into children's literature?

18 years ago I started trying to turn my stories for children into books. It turned out to be much harder than I thought it would be. I've stuck at it and even produced my own books for friends but it wasn't until Nelson and his monsters came along that I had something I knew I just had to make. Come to think of it, I think my four sons were part of the reason I finally knew what to do because I wrote every word as if I was talking to them.

What do you feel is missing in the world of children's and YA lit?

Hmmmm. I'm not exactly sure what's missing but I am sure a lot of writers like me are inspired to write something that isn't already sitting by the yard on the book shelf.

What happened in your workshop at Bath Children's Literature Festival?

I think everyone there will tell you it was a life changing experience on a par with walking on the moon.

What advice would you give to any young writer who was looking to hone their skills?

Just read! Fill your head until it overflows and you find your own stories spilling out. And once you start, do not stop until you get to the end. Avoid giving up half way even if it's turning into a real stinker.

Photo by Cody Burridge via www.garthjennings.com

Want to know what it takes to be a writer? Check out Creative Choices, the arts career website, and the profile here 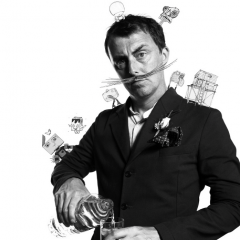 Garth Jennings has worked in both film and publishing, directing such classics as The Hitchhiker's Guide to the Galaxy and signing a three book deal with Macmillan Children's books. This weekend, he could be found at Bath Children's Literature Festival...