Susan M Coles is a passionate advocate for art, craft and design education in the UK (and beyond).

How would you describe your role the creativity/education debate?

In the first instance, I never forget that I am an artist, and always will be. Then, I consider myself to be an activist. A shaker, and a stirrer. I may appear to be an irritant to some people, but I'm passionately driven by the need to make sure that all young people have a wide and diverse range of Arts experiences as they go through school. So, I guess I am like a dog with a bone; I'm not letting go.

When did you first notice that there was a problem with the way the arts are handled in schools?

In 2010, after the first White Paper on Teaching from the Coalition government was published, where there was a change of direction in how children would learn and what they would learn. The creation of the suite of subjects that make up the English Baccalaureate excluded the Arts, for no apparent reason. No one has ever explained what the EBacc is based on (research wise) or where the choice of subjects came from. But, many people think it was the personal preferences of Mr Michael Gove.

Do you think this is a long held issue in our country, or something that has sprung from the last few years of cuts?

Historically, the Arts have had their ups and downs with different government strategies and change. But, with the pre Coalition government, there were notable projects, which supported the Arts in schools, such as Creative Partnerships and Find Your Talent. There seemed to be much more positivity about Culture and the Arts as an entitlement. It was more important in OFSTED inspections too. And, we also had Specialist Arts Colleges.

Do you think this issue stems from society, government, or something in between?

I think that people/society value the Arts, whether it is through enjoying a creative video game, walking through a gallery, making or listening to Music, going to see a film or just creating something themselves. We do need to make them understand that the Arts are everywhere and that it isn't some elitist activity. "Arts for all" has to be the mantra. Understanding the role of the Arts in society and human development needs to be more generally understood.

Educationally though, the school curriculum has become a political football and far too many politicians and civil servants (who don't have a background in education) "play" with education to suit what is essentially political ideology. The current view that we should be churning out children with an emphasis on just STEM subjects is narrow and restrictive and just plain wrong.

You do a lot of campaigning around this, what do you feel gets the best results?

Social media allows everyone to get involved, so creating spaces for debate online, via Facebook, blogs or Twitter and being able to contact politicians that way (Twitter in particular). I've organised campaigns like Rainbow for Mr Gove, Letter For Mister Laws, and #askNicky, which have brought together artists, teachers and young people, to send postcards, write/draw letters, post up placards and photos which communicate their own thoughts and feelings. I believe that we have to give everyone that opportunity to be involved, and adding some humour to a campaign draws attention. I'm not sure politicians "do" humour, but I will keep trying. I also strongly believe that highlighting and showcasing and sharing widely good practice in schools must be done; this has influence because it shows what can be done successfully in schools with the Arts, and not at the expense of achievement and attainment.

Working by myself but also as a member of (and past President of) The National Society for Education in Art and Design, to influence policy makers has been very important. My MP (Sharon Hodgson) and I set up an All Party Parliamentary Group on Art Craft and Design Education, which has been very influential in presenting the case for our subject.

How has your work impacted, is there any moment that you feel especially proud of?

Yes, the APPG, because it has grown from a very small group to a large influential group (we had standing room only at one two hour session) and continues to attract attention and interest across a wide range of Arts organisations and political parties.

In an ideal world, how would creative education look to you?

A broad and balanced curriculum for all children, in all types of schools, but with a national expectation that this will happen. Teachers being encouraged to teach creatively, across all subjects, without fear of OFSTED. Risk taking, making mistakes to be encouraged, learning from mistakes instead of being seen as "wrong". A curriculum linked to the world we live in and to young people's own interests. Parents, Carers, Senior Leaders, Governors, Government, all valuing this. Schools promoting the Arts for all, not as an "add on", but as part of a young person's daily education. More links between schools and the creative and cultural industries would need to happen, to show the importance of creative education in a real world context. Most of all, I'd like all children to enjoy school.

What advice would you give to any young people who want to join the discussion?

Get involved, if you follow me on Twitter you will know when (and if) I have something on the go. I would like young people to make some one minute sound bites and post online, on Twitter using the #askNicky hashtag and #moreartsnotless hashtag. I would like them to say why the Arts matter to them, or ask Mrs Morgan a question about government policy. Talk to your teachers, school governors, your parents/carers. Celebrate what you do in the Arts in as many ways as possible. Write a poem, write a rap, get a tee shirt printed, create a drama, or a dance, organise a debate/discussion, which celebrate the Arts as entitlement. Use the topic as part of the Arts Award work that you do. Remember, in the United Nations "Conventions on the Rights of the Child", it says this "That member governments shall respect and promote the right of the child to participate fully in cultural and artistic life and shall encourage the provision of appropriate and equal opportunities for cultural, artistic, recreational and leisure activity." It's your life and you must all live by your own beliefs. Young people have a voice, use it. You are the future. 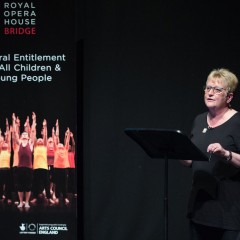 Susan M Coles is a passionate advocate for art, craft and design education in the UK (and beyond).