Trinity Rock & Pop offers musicians the chance to gain formal qualifications in rock and pop music, right up to Grade 8. We caught up with Christopher Walters, Head of Qualifications for music at Trinity to find out more.

What is Trinity Rock & Pop all about?

It's about supporting rock and pop musicians at every stage of their learning – giving them great materials to work with and specially designed exams to recognise their achievements.

What do you hope to offer young people through these exams?

We want to offer a framework through which musicians – both young and old – can build their skills, develop as creative performers and have a great time doing it. An important part of this is giving learners real music to play, which is why Trinity's Rock & Pop books feature well-known songs from right across the world of rock and pop music. Then, when learners are ready to take an exam, we want to give them an experience where every part of the test makes sense in terms of the kind of music they make. For example, Rock & Pop exams don't feature scales and ear tests like classical exams do – instead you can take an improvising test or be assessed on how you pick up some short musical sections you've just heard on a backing track.

Do you think there is still too much focus on classical music studies for young people?

It's about giving people the freedom to choose what's right for them. Classical music is important of course, and Trinity has offered assessments in this area for decades, but we also saw the need to cater for the many musicians who don't work in this genre. Rather than pitting different types of music against each other, it's about offering the right solution for each genre and recognising that assessment approaches might not be the same in each.

Why might rock and pop be great genres for young people to learn?

We know that many young people are passionate about rock and pop, so if this can be used as vehicle for learning music then so much the better. Another reason this type of music can work so well in education is that there is so much richness within the genre. You can find music that's both simple and complex, old and new, political and carefree – the contrasts are all there and there's so much to discover. Also, you'll never struggle to fill a rock and pop gig, so for young people who like to perform it's a great thing to get into.

What is the best thing about working for this programme?

Seeing people achieve things and surprise themselves, seeing young learners lay the foundations for a lifetime of music making, and seeing older people discover a passion for something new later in life. Also, helping the genre of rock and pop get the recognition it deserves as a serious form of music! But mainly just seeing people have fun through the music they love.

What is the biggest challenge in bringing rock and pop to young people?

One challenge is the idea that success in rock and pop can happen overnight – this is a myth and a great deal of hard work goes into each and every success story. The good news however is that hard work brings its own rewards – pride in what you've achieved and satisfaction in knowing that your musicianship is built on firm foundations. Knowing that you've worked hard also boosts your confidence and helps inspire others.

Is there anything you particularly want to promote to young people at the moment?

Perform together! Many of the songs in Trinity's Rock & Pop books appear in versions for different instruments which can be combined and used by bands. In fact, bands have their own special assessments as part of Rock & Pop, so if you're serious about your band and want some useful feedback you should look into these. I'd also advise young people to take up some of the more unusual options in the Rock & Pop syllabus – why not perform a piece you've written yourself, or impress the examiner by using live musicians for one song instead of the backing track. More generally, I'd advise young people to get creative and dream big about their music making – and shout loudly about what they are doing so that schools can never doubt the value of music. 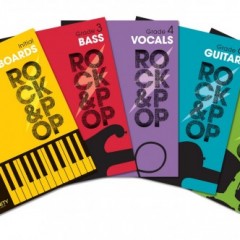 What goes on at...Trinity Rock & Pop

Trinity Rock & Pop offers musicians the chance to gain formal qualifications in rock and pop music, right up to Grade 8. We caught up with Christopher Walters, Head of Qualifications for music at Trinity to find out more.