Paige Murphy is a third year student at The Royal Central School of Speech and Drama and will graduate with a BA in Drama, Applied Theatre and Education in 2015. This course offers a varied and comprehensive spread of paths for its graduates.

At Central, we pride ourselves on our industry connections, and we strive to make sure that students graduate with their professional development already well underway. In many cases, this means placements, organised by the school, in some of the UK's foremost institutions.

I spoke with Paige Murphy, who completed a nine week placement at Shakespeare's Globe in the education department...

What did your role entail while at the Globe?

I worked on the education events side of things for the Globe's education department. This meant working on a range of different projects and using lots of different skills. I was extremely lucky that I was actually given a lot of responsibility straight away while still being allowed to sit in and learn more about areas where I was less experienced.

Tell us a bit about the projects that you worked on while at the Globe.

I worked on a family show called Shakespeare Untold, which was great fun. I got to sit in on castings, and the take part in work-shopping and devising the piece itself. I also worked on the stage management side of things, and there were several occasions once it was on when I actually ended up running the show single handed! My two amazing bosses were respectively head of education events and head of digital, so they were massively busy. This meant that I got to get really stuck in, with plenty of varied things to do.

How did you handle so much responsibility? Lots of people imagine that student placements involve a lot of admin and emails, but it seems like you were trusted to get your hands dirty, so to speak...

The truth of it is that I was completely prepared for it. On BA DATE we are consistently working in very professional environments. We are also equipped with the skills to hold our own in pretty much any situation. Arts admin isn't intimidating, and nor is speaking up in a workshop. I think that once someone on placement shows that they are secure in taking part as much as they can - and of course that they are able to! - more responsibility comes their way. The most useful skills which I brought from my course to this placement were probably those I learnt working with children and developing theatre events for specific audiences. Being confident doing these things meant that I got far more out of my placement.

Finally, any third year's most hated question...what are your plans for the future?

I always wanted to be a drama teacher, and the experience of working at the Globe has shown me lots of exciting new things that I can bring to future projects in education. I have a place at the University of Warwick to do my PGCE next year. The contacts I've made at the Globe have been invaluable - they are such a positive and dynamic group who have given me invaluable advice, and I know that what I have learned from them will go a long way to making me the teacher that I want to be. 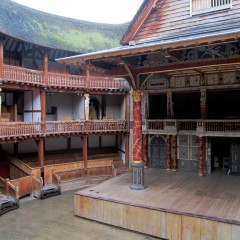