Rajesh and Naresh follows the eponymous characters in their efforts to find both partners and themselves. Rajesh (Brahmdeo Shannon Ramana) works as a banker in London, but travels to India on his mother’s insistence to find himself and potentially find a partner. There, he meets Naresh (Madhav Vasantha), who sells cricket bats and is also attempting to find love but is too awkward to make any headway. The production follows the pair as their arcs play out separately before they meet and find themselves attracted to each other.

The performances of Ramana and Vasantha are worthy of praise throughout. Vasantha’s timorous portrayal of Naresh is complemented by the self-assured characterisation of Rajesh by Ramana, and the repartee between the characters is entertaining to watch. Vasantha and Ramana also demonstrate their acting range in the play as they both move between moments of vulnerability, to confidence and humorous playfulness, all while retaining the interest and investment of the viewer. As a two person cast, the duo carry the production between themselves, playing a multitude of other characters, including the exuberant Billy (Ramana) and Rajesh’s overprotective mother (Vasantha).

The show’s production was also of note – the play takes place entirely on a small stage, with Rajesh and Naresh’s scenes taking place individually on each half. The show makes the most of this space, with various props remaining visible throughout, while a coat rack is used to store clothes that denote Ramana and Vasantha’s other characters. The music chosen for the play is also fitting, blending together the zestfulness of Queen with the heartstring-pulling potential of Bollywood, while moments of choreographed movement and dance between the starring duo are well-executed and carry a sense of gravitas. The use of lighting is effective, with a hazy purple enveloping the stage to indicate that a fantasy sequence is taking place, while the dimming of the stage lighting is utilised to show the passage of time.

Rajesh and Naresh also functions as an insight into British South Asian culture in addition to the world of queer relationships in London and in India. The play raises and discusses the stigma that is faced by Rajesh as a brown gay man in London as well as the sense of progression that has occurred in India with regard to queer relationships. Rajesh’s relationship with his mother is one that elicited a chuckle from me at various points as her character fits the mould of a somewhat overbearing parent who holds her child in high esteem. The climactic scene in the play provides a sense of catharsis for the characters and viewers which is continued by the rousing and triumphant final scene.

Rajesh and Naresh is a must-watch show at this year’s Edinburgh Fringe that entertains and tugs at the heartstrings and sees Vasantha and Ramana deliver memorable performances in their various roles.

You can book tickets to watch Rajesh and Naresh here. 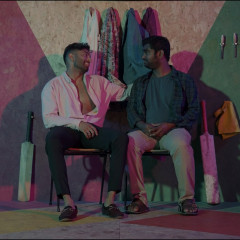