Voice MagReviewsReview: Black is the…

It is a performance of suggestion. The distant sound of a parade, the clutching of a letter, a crack in her voice as she recounts the story of a loved one or when she remembers an injustice. Campbell moves around a single bedroom and transforms it dozens of times with only the slightest of actions. Although she is the only performer, she never feels alone. The ghosts of Simone’s mother and father, of her entire history, reach out to the audience through her. The various impersonations she does, and the way she directly addresses her parents and the audience, makes the story feel alive, despite being referred to in the past tense.

Campbell takes on the task of portraying an icon of song beautifully. She is filled with energy and charisma, but there is always an inescapable element of tragedy to the character, appropriate when considering the real figure’s inimitable stage presence and heartbreaking story. There are moments that are truly gut wrenching, like her final address to her father and the newsreel that describes the aftermath of Martin Luther King’s assassination. It is extraordinary how completely Campbell is able to summon up a maelstrom of emotions, helplessness and despair, and then take these feelings and incorporate them into a moving musical performance. Her voice may not live up to Simone’s, but this is hardly a criticism in light of the singer’s legendary status.

The announcements that accompany the newsreel relate the hatred and violence directed towards the civil rights activists, and feel distressingly relevant due to their parallels with the BLM movement of today. The show displays the proactive attitude Simone held when it came to fighting for the rights of Black Americans, and firmly steers the story of the civil rights movement away from the idea of governmental benevolence, which an unfortunate number of narratives adhere to.

There is a feeling of wanting it to be longer, of wanting more to be explored — the lives of her mother and father, her role as an activist, what became of her desire to play classical piano. Perhaps this simply demonstrates how effective the show is at bringing the audience into Nina Simone’s life.

In the end, Campbell quite rightly received a standing ovation from the audience. It was an exceptionally immersive experience, and despite the strangeness of the socially distanced seating, I could not have asked for a better reintroduction to live theatre. 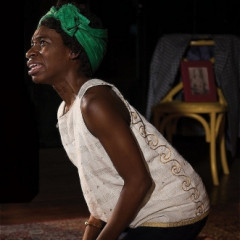 Review: Black is the Color of my Voice