A Tour of the British Isles

On Friday 6th August I attended a concert given by the Trio Paradis at the Town Hall in Midsomer Norton, Somerset, a change of venue owing to poor weather.  The Trio Paradis (piano, violin, cello), is a semi-professional group.  Their repertoire is often more serious and substantial; this concert opened their new season.  They perform in Frome, Bradford-on-Avon and Midsomer Norton, and often give repeat performances in the three towns.  The concert had a good audience of around forty people of various ages.  The room was a fairly large one at the top of a Victorian building, with a good, not-too-echoey sound quality which suits the distinct tones and the dynamics of a small ensemble.

This was a wide ranging but well chosen mix of music taking the audience on a journey around Britain.  Most of the pieces were either folkish or completely 20th Century in origin – traditional, popular, crossover, and art music.  Examples of the works played are Linden Lea (Vaughan Williams); Green Hills of Somerset (Eric Coates), and Here Comes The Sun (George Harrison).

Most popular amongst the pieces were:  The Floral Dance, Stormy Weather and Bring Me Sunshine, which really got feet tapping.  My favourite was Madeline Dring’s A Bay in Anglesey, a setting of a John Betjeman poem from 1966.

The music was cheerful, well-played, and I felt happy afterwards.  I found it very enjoyable.  It was a lovely experience and it was also stimulating.  Some of the tunes were quite sad when others were jolly.  I liked the contrast.  I was quite moved after I had left.  The violinist was off the note briefly at some point but the rest of the concert was very pleasant.

I have enjoyed concerts before by the Trio Paradis, as I have had lessons from the pianist.  I liked this one particularly because of the changes of mood in the music.  I possibly preferred the quieter moments, as they were more restful and I could think my own thoughts.  I found some of it exciting.  I’m looking forward to their next performance. 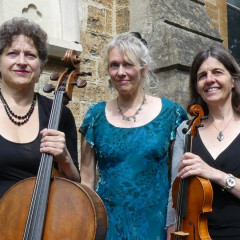