I will be reviewing the play The Macbeth Curse which I watched on YouTube. It’s like the play Macbeth, but it also shows what happens to the actors who put on the play. It shows that saying the word Macbeth in a theatre causes bad things to happen! It was created by Prime Theatre, Octagon theatre and Bolton co-production.

I liked it because the story was funny - the characters were running around and creating a comedy atmosphere while retelling the play Macbeth. Everything was completely synchronised and co-ordinated. The actors knew their parts well.

I thought the writing was well thought out and had a lot of context in it. In the story they only had a few props to work with which I enjoyed because it meant they had to transform a few different props like cardboard boxes into props for every part of the play.

There were 4 actors in the play. Because there was only 4 of them, they had to play so many parts, which must have been difficult. It was a big accomplishment. Despite having to play so many parts, the actors didn’t rush through anything. It allowed the audience time to see what was happening and understand the plot.

The set was a medieval castle, and the costumes were matching that. These helped tell the story well. The music changed from nice calm music to eerie loud terrifying music. It changed to match the scenes which were happening, which also helped tell the story. The lights also changed throughout the play. Sometimes they were on, sometimes they were not which created a different feel. The lighting worked with the music and the set to create different feelings and atmospheres.

I think it could have been improved if they could add more “moving pictures” and create more jokes.

I would recommend other people to watch this play! 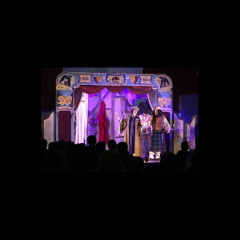