Who needs a CV when you can lift your professional gifts off your birth chart? Unnamed and unemployed individual “A” approached the job centre as a Gemini with a Capricorn moon, so naturally boasted excellent organisational skills and the ability to meet strict deadlines. Astrology aside, the “Locky D” has wreaked havoc on our community, leaving creatives with questionable furlough income courtesy of our boy Rishi and his governmental gang. A career in the arts mid-pandemic has left a lot to be financially desired, and I’m not the first to say it. This show provided a showbiz insight into what A-list unemployment looks like, and how we can make the very best of a bad situation.

We were welcomed by Karen, a “cool” boss dressed in a splendid white power suit replete with a “can I speak to the manager” wig and a lectern fit for middle management. We encountered a team of performers committed to their cause and unafraid to call out the “diversity courses” that just never seem to be a budget priority, the virtue signalling of a performative black square on instagram, and the lazy rainbow flag in the office never quite followed up with tangible change. A faulty mic was an unfortunate hurdle overcome with professionalism and competence, but in truth I would have loved to have heard those lyrics, perhaps it was a roundabout way of limiting the self proclaimed male prerogative to interject… Alas, we’ll never know.

The cast turned round a high level of technical talent and aptitude — the vocal runs were intuitive and intentional, the choral backing tight and effective. Each performer had the opportunity to show off their pipes, and quite rightly so. Even Karen kicked off the kitten heels in an intriguing attempt at interpretive dance. What more could you want? The collective interpretation of “Total Eclipse of the Heart” captured the attention of many, whilst a parodied rendition of Miley’s “Wrecking Ball” demonstrated a first-rate manipulation of lyrics, the standout line being — “It’s not PMS, I’m just making less for the same job as you.” The absolute kicker remains Britney’s masterful “Work B***”, which was accompanied by synchronised vogueing and an exemplary demonstration of the results of an abundantly successful teamwork away day.

In short, this show was outstanding. A considered and frankly hilarious execution of what we all wish career conferences looked like. In Karen’s hallowed words: “Don’t you just feel… galvanised?” Yes Karen, I absolutely do. 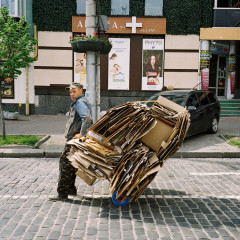