Even if you aren’t an expert on Gilbert and Sullivan’s comic operas, their names will be familiar. Key figures in the historical development of musical theatre, Arthur Sullivan’s musical compositions accompanied W. S. Gilbert’s fanciful narratives to worldwide and lasting success. Another figure who was vital to their success behind the scenes is Helen Carte, whose business acumen and wider impact on British theatre has been cast into obscurity. The Coily Dart Theatre aims to right this wrong with their audio performance Gilbert and Sullivan’s Improbable New Musical… and Helen.

The script by Susan Elleby takes the historical facts of Carte’s life and weaves them into a multilayered narrative that transports the audience between imagined and real timelines. The show opens with a deceased Gilbert and Sullivan who are playing scrabble in ‘peaceful eternity’ but are asked to create a long overdue operetta based on Carte’s remarkable life. We listen as she goes against societal expectation by going to university, learns how to navigate issues of copyright and pushes to build the Savoy Theatre to present Gilbert and Sullivan’s works. The show’s strength is its strong feminist undercurrent channeled through the character of Helen, who, as we discover, is yet another accomplished woman that has been disregarded through a patriarchal rewriting of history.

As this was an audio-only performance that was created, rehearsed and filmed entirely over Zoom, there was a lot riding on the voice actors and singers to effectively present Helen Carte’s story. The character-building through the dialogue is convincingly and engagingly performed. However, some of the songs arranged by Vicky Hing, which are based upon Sullivan’s original compositions, get lost over recording. The choral harmonies still sound impressive, but the lyrical witticisms are difficult to catch.

If you have no interest in or knowledge of Gilbert and Sullivan, then you can give this musical a miss, as the liberal references to their work will go over your head (as they did with me). But the strong performances, historical awareness and motivation to highlight a forgotten figure of musical theatre history are still admirable. 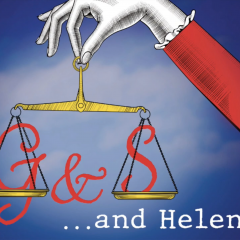