Brighton has a rich camp culture, owing it’s queer prowess to the LGBTQIA+ community rooting itself in resistance, protest, and celebration. Alfie Ordinary’s House of Fun was just that — a gleeful ode to “silly” drag, to foolish entertainment, and to lighthearted fun.

The show began with a real life cheeky girl in a pleather body con number and a bright jewelled lip, followed by Snow White Trash who took to the stage in a grand pink taffeta gown, a voluptuous pale peach wig, and a saxophone belting queer classics with ease. What followed can only be described as a triple threat in tap shoes, a stunning queen in a vision of pink, ending her number with a crowd pleasing death drop.

The show ended with none other than Joe Black, the queen most recently propelled to stardom by way of RuPaul’s Drag Race. They dramatically appeared as a bejewelled figure dressed in a generous golden gown replete with sequinned shoulder pads and a butter yellow feather boa. Staring directly at a member of the audience because “the intro is a bit long”, Joe married comedy with cleaning windows, through dreamy vocals and gracious audience interaction. Who said public cream pies were a thing of the past?

Alfie is anything but ordinary, a drag prince of extraordinary talent and grace, eloquently raising a glass to toast our health, our happiness, and the return of live entertainment. Chin chin! 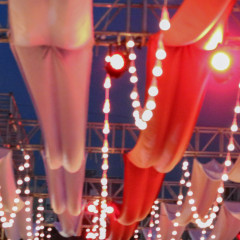