Content warning: This play addresses issues around eating disorders that some people may find triggering.

The potential for awkward delivery and stilted storytelling is rife with theatre performed over Zoom. In spite of this, Putney Theatre Company’s play The Devil’s Food Cake manages to give an emotive and realistic account of a family grappling with their daughter’s eating disorder.

No relevant topic surrounding eating disorders is left unturned in this play – the audience is told of the physical side effects of starvation such as shivering, weakness and exhaustion, and the characters discuss how celebrities and social media are complicit in diet culture. The charity Beat estimates that 1.25 million people in the UK have an eating disorder, and the audience of The Devil’s Food Cake are given a snapshot of the day-to-day struggles sufferers can face.

This production has managed to use Zoom and its various limitations to the advantage of the performance. Where the split screens would usually be distracting, they are instead used to highlight the isolation that the character of Sophie feels in struggling with her eating disorder. She remains split off from parents and sister, who are all grouped together on one screen even during scenes of shared mealtimes. The characters call to each other across the screens, emphasising the sense of distance as Sophie becomes increasingly unwell.

The specific roles assigned to each familial character are expertly established. The maternal character Jenny, played by Leslie Ann Jones is overbearing and distressed about her daughter, while the father Frank is bemused and unhelpful, as actor David Jones delivers convincingly ignorant lines such as ‘We didn’t have eating disorders in my day, you ate what you were given!’. The family unit and their reactions to Sophie’s eating disorder are explained directly to the audience by therapist Jasmine, played by Caroline Salter. She gives insight into the characters’ psychological behaviours and advises the family to ‘personalise the eating disorder, give it a name, like Ana’.

The disembodied voice of Ana, the eating disorder, is the dramatic star of the show. Voiced by Catherine Allison, Ana represents the internal voice that tells Sophie to count calories and purge after eating. Calculated and conniving, Ana is eventually released onto the family too, as she manipulates Frank into taking his frustrations out onto his ailing daughter. The choice to make Ana a disembodied voice who negatively influences other bodies is inspired, and the character is a genuinely frightening force throughout the play.

The dramatic pacing of The Devil’s Food Cake is excellent, as we watch Sophie’s eating disorder get worse before it gets better. The concluding scene of Sophie attempting to cook a recipe while arguing with Ana leaves the narrative on a cliffhanger, and demonstrates that healing from an eating disorder is not a linear process.

The Devil’s Food Cake is an important and brave piece of digital theatre that manages to be simultaneously educational and sensitive. 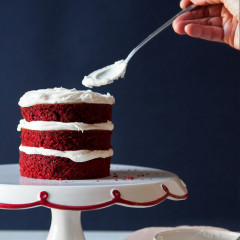