Voice MagReviewsThis Is Not A Solo D…

This Is Not A Solo Dance, is, like most performative art pieces, open to interpretation. Based around the Mandarin character 女 pronounced ‘nu’, meaning female, woman and women, we watch as performer Ruby Yun Er-Chang covers a white canvas with black paint, before undulating herself in it. The performance is “inspired by Chinese calligraphy” as Er-Chang “embodies the writing of the word ‘woman’ and transforms it into dance … writing down the conversation between herself and the world”. The bold artistry of this show will either alienate or entrance audiences, and I found myself part of the latter.

Set in a black curtained room with only a white canvas, black paint and Er-Chang to focus on, the audience is given the space to mindfully witness each movement and interaction with the paint, and what they could mean. Er-Chang covers the canvas and herself in the black paint while writing the character ‘nu’ with her hands, as the voiceover repeats the steps to write the character. 女 has three steps and is expected to be written in a set order, but Er-Chang soon deviates from this, posing the question: does the character still mean woman?

This evocative deviation from expectations of womanliness and femininity is further represented by Er-Chang covering herself and her white shirt in black paint before placing it on a hanger as it rises away. As the white pieces of the set become black, the strict concept of the 女 character and its definition of woman is overturned and Er-Chang is left standing under a spotlight, suggesting a newfound independence and individuality.

This crescendo is reached through excellent pacing and clever editing that shows Er-Chang on her own and split into two screens, as the editing rapidly transitions her between the plural of women and an individual woman. Again, such a contrast is demonstrated by the deliberately chosen colour binary of black and white. By the end of the show, the black encompasses the entire set, and the performer’s transformation is complete.

If not for its interpretive message, then This Is Not A Solo Dance is worth your time for its striking imagery and clever production.

Tickets to stream This Is Not A Solo Dance at Brighton Fringe are available now. 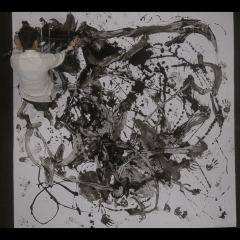 This Is Not A Solo Dance