After bursting onto the scene in 2018 with a genre-bending self-titled EP that blended hip-hop beats with pop-punk melodies and an emo mentality, Yungblud has gone from strength to strength, building up a broad fanbase by collaborating with well-established artists as diverse as Halsey, Marshmello, and Bring Me The Horizon. Although the artist formally known as Dominic Richard Harrison has since established a brand of his own, Weird! succeeds only in proving what Yungblud does best – creating middling radio-ready tunes that rely a little too much on what’s come before.

Aside from a string of infectious singles (‘cotton candy’, ‘strawberry lipstic’, ‘god save me, but don’t drown me out’), much of Weird! is ultimately forgettable, a disappointing follow-up to a comparatively fresh and daring debut album. The record peaks – all too slowly – with ‘god save me…’, an empowering ballad to perseverance that sounds like a My Chemical Romance tune filtered through a 1975 lens.

Herein lies the problem with Weird!. Almost all of its songs, including its highlights, sound as though they have been done before – and better – by more daring artists. Tracks like ‘superdeadfriends’ and ‘ice cream man’ might add to Yungblud’s oeuvre and already expansive soundscape, but the majority of the songs here owe more to well-estbalished acts than Yungblud’s own talent. Closer ‘the freak show’ could have been on any Panic! At The Disco album were it not for the questionable noughties hip-hop SFX forced into the mix, while ‘charity’ is Blur’s ‘Parklife’ redone for 21st-century audiences.

If Yungblud can be commended for one thing, it is for not being shy about his influences. ‘mars’ and ‘it’s quiet in beverly hills’ are both built around melodies and lyrics taken straight from more successful artists; Harrison even tries to get away with nicking David Bowie’s most iconic line to embarrassing effects. As a result, listening to Weird! often feels like a game of ‘spot-the-influences’, as though Yungblud is inviting his audience to guess which songs he was trying to emulate.

The lyrics fare no better in terms of originality, and offer the same sort of depth you might expect from any cliché-dependent Instapoet. Yungblud has taken the pages out of a wannabe-voice-of-the-generation’s playbook by co-opting other people’s experiences in order to play up to his misfit persona. Yungblud, who together with Harry Styles has been accused of ‘queer-baiting’, continues his long-standing lyrical war against oppressive parents – despite his own parents paying his rent while we was studying at arts school. As such, Weird!’s lyrics feel largely disingenuous, almost as if they were focus-grouped to appeal to the widest possible audience of ‘misfits’ rather than attempting to present a true artistic statement. Pop this is, punk it ain’t.

Despite incorporating a wide range of genres, Weird! does pull off the neat trick of managing to sound more-or-less like a cohesive record. While more accomplished artists like The 1975 demonstrated the pitfalls of making an album that tries to encompass all genres under the sun in the bloated and misguided Notes On A Conditional Form, Yungblud’s attempts at noughties emo balladry, Ed Sheeran-esque acoustics and everything in between are filtered through a distinctly bubblegum-pop production lens that maintains a sense of identity. The only song that truly feels out of place is the Machine Gun Kelly-featured ‘acting like that’, which owes a bit too much to Metro Station to be enjoyable while simultaneously feeling like a reject from Kelly’s brilliant Tickets To My Downfall.

Although Weird! does feel more like a cohesive work than most other designed-for-playlists records, it’s hard to ignore the feeling that Yungblud’s sophomore effort feels more like a cover album showcasing Harrison’s favourite artists than an original work in its own right. The spectacular ‘god save me…’ was a promise Yungblud never delivered on, and one can’t help but think that Harrison’s records would fare better in the future if he takes the time to hone one genre, instead of continuing to dish out shallow imitations of a broad spectrum of better songs in order to perpetually remain in the public eye. 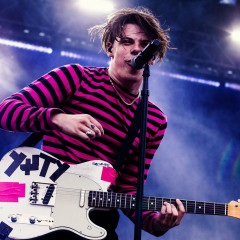