BLAST is a short film from the New Creatives project, inspired by radical ideologies from London in 1914. The piece was created by New Creatives artists Roseanna Anderson and Joshua Ben-Tovin.

I really enjoyed the overall design and style of this short film. Various scenes weaved together – a couple on the roof, women watching a mine performance and two men dancing in the countryside.

In particular, I enjoyed the dancing scenes. They were aesthetically pleasing, and also appeared much more modern in style than everything else. This modern twist could be felt in both the clothes that the dancers wore, and even in the style of the dance itself.

The cinematography throughout the short was stylish and attractive, especially during the dancing parts of the film. The soundtrack was atmospheric and added to the slightly eerie tone of the film. Even the bolk pink lettering seemed to compliment the radical themes that were being explored.

That said, despite its aesthetic flare, exciting cinematography and gripping soundtrack, I couldn’t make sense of the underlying story. While I felt the urgency of the piece, the subtitles dotted through the film weren’t enough for me to make connections between the different scenes. Was there a connection between the scenes, or should they be taken as individual vignettes? It was never clear.

It does lead to an interesting question about the presumption of knowledge an art piece can expect of its audience, as I suspect that part of my confusion stems from my lack of knowledge of the context of this film and modern art in 1914. Perhaps knowing more might have increased my enjoyment of the film and allowed me to appreciate the story being told.

We also interviewed Roseanna Anderson and Joshua Ben, and you can read that interview here. 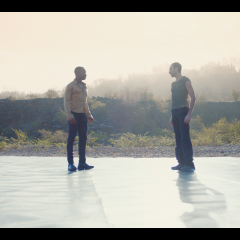