Voice MagReviewsShe Is A Place Calle…

She Is A Place Called Home covers the life of two British-Nigerian sisters as they prepare a dance for their father’s wedding to his second wife.

The two sisters at the centre of the show are played by Jordan Noel and Nicole Acquah, both of whom do a phenomenal job. Their dynamic is electric and their connection provides extremities of both warmth and conflict that reflects real sibling relationships. These performers manage to make the piece’s tonal movements between jokes about how men are trash to reflections on shared trauma work seamlessly. Whilst their interactions are great, they both also carry powerful monologues which barrage you with raw emotion.

She Is A Place Called Home consistently feels authentic, whether it’s the hilarious attempts at Pidgin English, or the song choices throughout the production, everything feels specific to British-Nigerian culture without worrying about over-explaining to ‘outsiders’. At the same time, everything still feels relatable enough that non-Nigerians will still have a lot to connect to, especially when it comes to the broader ideas of the play.

This is a play which covers a lot of ground with its themes, ranging from patriarchy to eating disorders, to abuse, and executes on all of them brilliantly. No punches are pulled, but at the same time, it doesn’t feel like you’re being inundated with trauma for its own sake. One of the great triumphs here is in painting a nuanced portrait of psychological abuse and how culture is often used to normalise this behaviour – moving far beyond the tropes we’re often shown.

She is A Place Called Home provides a nuanced, powerful portrayal of sisterhood in the face of trauma and is a must-see. 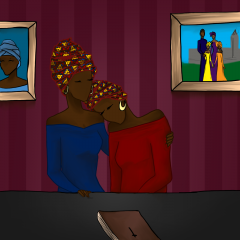 She Is A Place Called Home