Walking into beeping notifications and twitter feeds, I already had the feeling this would be a unique experience. With such a simplistic set, I had the worry that the show may be edging on underwhelming. I mean, any West End show must have incredible set design, right? WRONG. Musicals have a stereotype of being more fun and feel-good, but even with a cast of only eight, the performances given by every cast member were some of the best I've seen. Evan Hansen himself, played by Sam Tutty, was phenomenal in expressing such a complex character. I couldn't begin to believe that this was his West End debut! Never have I experienced a show where such genuine emotions were felt.

The plot follows teenager Evan Hansen, who suffers with social anxiety, and classmate Connor Murphy, an antisocial and aggressive drug-user who’s sister Zoë is Evan’s crush. Evan’s therapist has told him to write letters to himself about the good parts of each day, and in one of these letters he mentions Connor’s sister Zoë. Connor bumps into Evan and notices his sisters name in the letter, becomes furious and grabs the letter from Evan.

Soon, Evan finds out that Connor has committed suicide, and is called by Connor’s family as a friend of Connor’s. Evan, clueless, goes with to find out that Connor had his therapy letter on him when he died, titled “Dear Evan Hansen, and signed off, “Sincerely, me.” The Murphy’s assume the letter is from Connor to Evan, and Evan struggles to tell the truth about the letter’s origin. The play follows Evan as he navigates his previously non-existent friendship with Connor, and tries to comfort his family while staying true to himself.

You know it’s moving when you’re crying before the interval – that’s usually saved until the ending! But I spent the entire show in second-hand anxiety for the main character Evan, who carried this massive secret with him throughout the play. Edging on selfish but still being able to evoke sympathy, his motives were real and, to an extent, relatable. He just wanted the people around him to be happy!

The emotive and often stigmatised themes were handled with great care, somehow encouraging thoughts and conversations that aren’t easy or common in a sensitive and truly special way. The tagline of the musical, ‘you will be found’, rings throughout the play as we follow Evan through an unusual but thought-provoking chain of events that led to tears streaming endlessly down my face (in a good way!).

Words can’t describe how effectively director Michael Greif handled the incredibly written script, and I can’t stress how much I recommend this show. 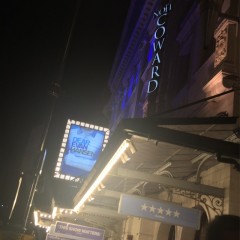