Watching Matilda the Musical is like opening the pages of your favourite fairy-tale book. The script straddles the border between the Grimm brothers and Disney, bringing a childish fantasy world to real-life social issues. That is not to say, however, that this musical is an infantile piece full of fluffy, over-theatrical stereotypes. The darker themes of the plot grow in strength throughout the musical, as audiences realise that it touches on more relevant themes than you may at first assume. Insightful audience members will appreciate the exploration of the corrupting nature of power, through the terrifying figure of Miss Trunchbull. Especially perceptive members may even see socialist themes running throughout. The titular protagonist, Matilda, asserts that “even if you’re little you can do a lot”, participating in an uprising of “revolting children” to overthrow the dictator-like headmistress. This means that the aspects which are lost on children can add another dimension to this production for their parents.

However, the most comedic stock characters are also the most antagonistic of them all, using witty humour to undercut their violence and cruelty. It appears that the kinder you are as a character, the less you are caricatured. It is this comedy which helps maintain the playful atmosphere onstage, enrapturing audiences of all ages.

The production adopts a highly-spirited theatrical approach to the story, breathing life into the characters of Matilda’s story. The ingenious use of physicality may help to keep younger viewers’ attentions, but it also impresses upon older viewers how full of enthusiasm and animation the characters are. This is crucial in seeing the production though the lens of a child’s eye, helping all members to embrace their inner youthfulness. The rejuvenating energy which the cast brings is equalled only by the astounding professionalism of the younger cast members. Neither is it put to shame by the innovative set, which creeps into the auditorium to encompass the audience in the performance. The lighting also embraces the audience throughout the production, drawing them into the sections of story-telling and supporting the cast’s use of the auditorium.

Not only does Matilda the Musical transport audiences back to their childhood storybooks, but it also adds a healthy dose of the real world to the mix. It suggests that we too can find fantasy in the real world, rewriting our lives to make them as imaginative and romanticised as the inspirational protagonist herself. 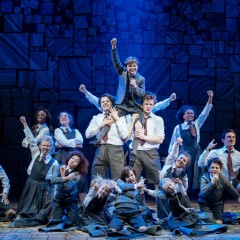 The Marvellous Mayhem of Matilda the Musical