We might live in a world that’s much more accepting of homosexuality than it used to be, but love between two men or two women still isn’t seen onstage very often. Casus: You & I is a beautiful and open portrayal of the relationship between two men.

Jesse Scott and Lachlan McAulay dazzle with their incredible circus skills as they show off their talents in acrobatics, hoops, daring feats of balance involving a precarious stack of chairs and even aerial trapeze. They are marvellous performers, executing each move with precision and simplicity.

As a duo of two men, their relationship shows an interesting balance, as - despite Scott being significantly taller than McAulay - they both take turns to carry the other, something rarely seen in the more ‘conventional’ duo of man and woman. Both have strength, and both have to support the other at times, which I think is a crucial part of a relationship.

With support comes trust, and the absolute trust between the two men is clear to see; most of the stunts they do would be impossible without it. The setting is a domestic one, which sees both men occasionally separating to do their own things before coming back together in a simple display of the need for both dependence and space. Every interaction is natural and has a beautiful flow that clearly shows how easily the two fit together.

The show also challenges conventional standards of masculinity, with Scott and McAulay playfully dressing up in various dresses and heels to the poignant sound of the song ‘Boys Don’t Cry’.

It’s relatively rare to see a full standing ovation at a Fringe show, but this got one when I went, and I wouldn't be surprised if it receives one for every show. It certainly deserves it.

Casus: You & I is on at 15:10 at Assembly Roxy until August 26th, excluding the 13th and 20th. For more information and to purchase tickets, visit the EdFringe website. 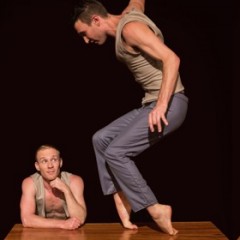