Katie Anderson plays Eve, a young woman struggling to cope with the demons from her past and the guy who isn’t her boyfriend flirting with other women. Gabriel, played by Toby Robertshaw, has his own demons, which come to light when Eve starts questioning their relationship. Drowning their problems and feelings in alcohol and sex, they are complicated characters who are difficult to like, but easy to relate to.

Anderson and Robertshaw both perform well, although the dialogue between them feels slightly unnatural; it’s easy to tell it’s scripted, rather than seeming realistic. Their emotions, on the other hand, are very believable and excellently portrayed, which really lifts the piece.

The waitress who Gabe flirts with, played by Annie Philbin, is an enigmatic character, appearing for most of the play as a figment of Eve’s imagination; perhaps a manifestation of the feared obstacle between her and Gabe. She also frequently controls the puppets that are used to depict Eve and Gabe’s childhood selves, appearing during accounts of events in their youths that still affect them today.

The puppets themselves are slightly disturbing, with dark, hollowed-out eyes and pale faces, and I found their use extremely interesting. It almost feels dreamlike, as they move in slow motion and are handled as gently as one would a real child.

The simple set consists of a bathtub, which is used cleverly to portray the effect of Eve’s father’s critique throughout her childhood, as she repeatedly climbs into the bath to clean her legs, an action mirrored by the puppet of her younger self. I didn’t quite understand the use of black cloth, however, and feel there are perhaps one too many symbols in the play.

Darlings is on at 13:20 at C venues - C aquila until August 27th. For more information and to purchase tickets, visit the EdFringe website. 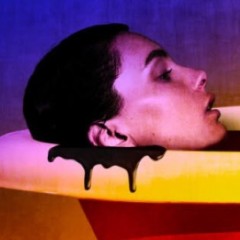