John Hastings has the audience rooting for him from the first moment he runs into his swelteringly hot Fringe venue and informs us there is an air-conditioning unit, it just doesn’t work, despite the expert opinion of four different engineers. He tells those of us wearing jumpers that we won't be for long, and he’s right, and every time someone takes off a layer it feels like he’s won.

Beginning with the tale of the hit-and-run he was a victim of last year, Hastings takes us on an extraordinary journey through his life and brain, bouncing between topics in a way that seems random but is actually very well-constructed. There’s a detailed account of the time he murdered a pigeon in front of a playground full of junior school children, and a hilarious description of the rally that would undoubtedly take place if anyone tried to ban alcohol in Britain. (He’s right - it would be the only occasion on which the English, Scottish, Welsh and Northern Irish would stand together, because it’s pretty much the only thing we all agree on.)

There’s much Hastings is angry about, from gun crime in the US to eyelashes for cars, and he’ll keep you laughing throughout the hour with his stories, rants and clever audience interactions. I wanted the show to end on a slightly bigger bang than it did, but otherwise it’s a brilliant show, and well worth a watch.

John Hastings: Float Like a Butterfly, John Hastings Like a Bee is on at 20:30 at Pleasance Courtyard until August 27th. For more information and to purchase tickets, visit the EdFringe website. 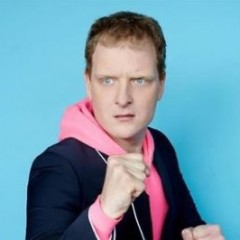