Voice MagReviewsClowntown: I Can Do…

Judging by their previous acclaim, Clowntown can do wonderful shows that are fun for parents and children alike. I can only assume, then, that the day I went just wasn't their day.

With only a handful of people in the audience, it might have been difficult to summon the excitement that comes naturally with a full house - although I do believe performers should give the same energy whether there’s one or one thousand people there to watch. Whatever the reason, the atmosphere was somewhat lacklustre, and failed to improve over the course of the show.

I did like the involvement of children in the show, which saw them dressing up as clowns and zoo animals, helping with magic tricks and joining in with dancing and singing. One particularly eager boy really enjoyed these opportunities, and others seemed to have some fun, but lost interest quickly and often somewhat ruined whatever the performers were trying to achieve.

There are jokes so bad they’ll make you groan, and magic tricks so lame it’s slightly painful to watch. Even the kids seemed confused. The only decent magic trick, where Dandy makes foam balls appear in his mouth, is done standing behind a microphone, so the audience cannot see his mouth at all, which completely defeats the point.

The songs are decent and reasonably well written, with catchy tunes, but everything just seemed a bit lacklustre and dull. The best part of the show was definitely watching the kids in the audience get involved. Unfortunately, there’s not much else to redeem it.

Clowntown: I Can Do Anything, the Funtastic Show by Sphere Clown Band is on at 11:35 at theSpace @ Surgeons Hall until August 25th, excluding the 16th and 22nd. For more information and to purchase tickets, visit the EdFringe website. 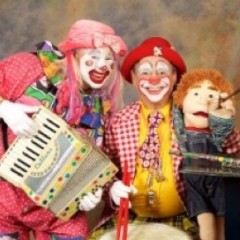 Clowntown: I Can Do Anything, the Funtastic Show by Sphere Clown Band