Evelyn Mok likes talking about uncomfortable topics and making uncomfortable jokes. Which is all well and good, if you can do it in a way that’s hilariously funny. Unfortunately, much of Mok’s material falls flat.

Mok grew up in Sweden as the daughter of Chinese immigrants and now lives in England, and, for me, her comments on the differences between the three cultures are the funniest and most interesting part of the show. She describes herself as a banana - yellow on the outside and white on the inside - and makes some amusing observations about how the people of each country deal with emotions and trauma.

A lot of the show feels quite disjointed, and Mok seems to lose her train of thought, often repeating ‘I don't know’ and ‘the thing is’ as she tries to get back on track, or so it seems. The overarching message - that talking about uncomfortable things is important - is delivered in a slightly lacklustre way. The ending is saved, however, by a hilarious song, which made me laugh more than any of the rest of her material.

Mok’s observations and stories are interesting and amusing, but suffer from too slow pacing. I think she could be really good, but she's not quite there with this show.

Evelyn Mok: Bubble Butt is on at 18:00 at Pleasance Courtyard until August 26th. For more information and to purchase tickets, visit theEdFringe website. 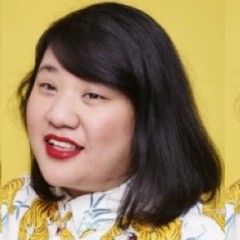