A delightfully awkward political comedy with plenty to rant about.

Alex Kealy’s comedy style is delightfully awkward and British in its presentation. Of course one of the opening jokes is about dirty talking with his girlfriend, in an overly polite manner, and this awkward stage presence works well for Kealy’s set. Despite some areas of the work being a little under polished, Kealy obviously had the audience on his side and laughing along with jokes about Brexit, Trump and the unpleasant side of London.

For me, the show ran a little dry of original thought or interesting observations on politics. It ran over events that we’re all probably getting a bit sick of hearing about, but then, it’s difficult to make political comedy completely present and polished. Maybe I’m expecting too much? Either way, I found I was laughing along with a gentle chuckle rather than a full belly roll, as none of Kealy’s political observations felt poignant or surprising. It was, at times, more of a rant than a comedy set, but he did manage to bring humour into the darker places.
Kealy’s delivery is confidently hesitant and some of his jokes had the audience rolling. There was a section about how terrible London is, including how severe the air pollution is, which is higher than the EU laws, which seemed to go down well. All the more reason to leave the EU, he jokes. Although the show could do with a bit more shaping, I was entertained and would happily catch Alex Kealy again.

A Kealy's Heel is a fun hour you won’t regret. 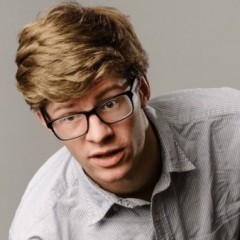 A delightfully awkward political comedy with plenty to rant about.