In a world that’s become obsessed with being politically correct, it’s incredibly refreshing to see two people throw caution to the wind and say utterly outrageous things that are both brilliantly funny and seriously poignant. A lot of acts at the Fringe comment on issues in today’s world in their shows, but not many do it as well - or as humorously - as Flo and Joan.

Flo and Joan’s catchy songs address everything from sexism and sex robots to internet hate and cracker-packer queens. They perform effortlessly together, their often deadpan humour complemented by charming interactions with each other and the audience. Different musical styles are executed equally well, and some truly excellent lighting enhances the mood of each number.

The first half hour of the show is filled with real laugh-out-loud humour, aided by impressive comedic timing. Towards the end of the show they take a more serious turn, which isn’t unexpected and happens smoothly and naturally. There are fewer belly laughs, although the laughter remains consistent, and I feel the slight change in tone isn’t a bad thing, especially as they end on a high.

This is a show about the world and a show about them, and it’s real and brilliant and important. Don’t miss this one - unless you’re easily offended, in which case, this isn’t the show for you!

Flo & Joan: Alive on Stage is on at 16:00 at Pleasance Courtyard until August 26th, excluding the 11th. For more information and to purchase tickets, visit the EdFringe website.

You can also check out the interview we did with Flo & Joan from last year! 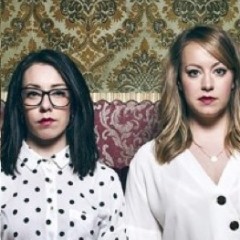