Catherine and Anita is a play about mental illness and abuse, but it is also a play about friendship and hope. It is a stark reminder of those we so often let ourselves forget, and will blur the lines between right and wrong as we know them.

Sarah Roy, who plays Catherine, is brilliant. I was slightly unsure at first about it being a one-woman play, but Roy doesn't need anybody else onstage. She commands the space effortlessly and captures a state of instability beautifully, appearing hopeful, scared, distraught and self-assured throughout. I believed her completely, and both liked and pitied her despite the terrible things she did.

As young Catherine, I found her portrayal less realistic; her manner and tone seemed older than the age she was meant to be playing. Catherine is a highly intelligent child, but her style of speaking and attitude still appeared to be those of a child three or four years older. This is a small flaw, but I think her skill shines far more in the scenes where Catherine is an adult.

The play is cleverly structured, with scenes from now mixed in with scenes from the character's childhood so that the plot is revealed slowly, rather than all in one go. The coloured lighting occasionally feels clichéd, but the strobe lighting effect during scene transitions reflects Catherine's unstable mental state well. The stark set keeps the attention focused on Roy, and the few props used help to build up the character's profile.

This is an amazing piece of theatre, and one that definitely deserves a full audience.

Catherine and Anita is on at Assembly Rooms at 21:05 until August 26th, excluding the 15th and 22nd. For more information and to purchase tickets visit the EdFringe website. 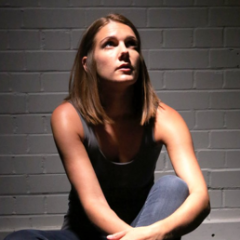