He'll certainly put a smile on your face

Slightly nervous, a little geeky and incredibly likeable, Hari Sriskantha is a stand-up comedian who might not make you laugh out loud, but he'll make you grin until your cheeks hurt.

His set is filled with the classic anecdotes about his new wife, divorced parents and that job he hated, but there is an overarching theme of happiness which is explored through a five-part story about a cavewoman named Amber. The structure of the show feels a little all over the place, with Sriskantha sometimes randomly returning to topics 20 minutes after first mentioning them, and I still don't fully understand Amber's relevance. The material itself, however, is witty and amusing, and there are moments of hilarity that show potential for genius.

There were, unfortunately, a number of times when Sriskantha spoke too quickly and interrupted himself before finishing a sentence, which created a slightly frantic tone and made what he was saying a little difficult to follow. It seemed like he was letting his nerves get the better of him in these moments, which was a shame as I felt many of his jokes would have been funnier had the delivery been slightly more polished.

I didn't find the show hilariously funny, but I genuinely liked Sriskantha and his material. He'll definitely make you happy, and for a show about happiness, I think that's quite a success.

Hari Sriskantha: Clown Atlas is on at The Counting House at 16:45 until August 27th, excluding the 14th. For more information, visit the EdFringe website. 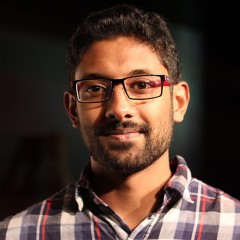 He'll certainly put a smile on your face