A chair, two wooden benches, a man, and a woman. They meet for the first time when she enters his hotel room and finds him staring out the window. What begins as a simple situation becomes an increasingly complicated and multi-faceted narrative as layers of make-believe inside of make-believe are introduced. This leaves the audience trying to piece together who the characters are and differentiate fact from fiction.

I was a little confused at moments, but I think that's kind of the point; this isn't a straightforward love story. It takes unexpected turn after unexpected turn, and comes to a conclusion that might just make you shed a tear. The chemistry between the two actors is wonderful as they bounce off each other effortlessly, both in lighthearted and intensely emotional moments.

Although they carried the audience's attention well, however, the show seemed to lack much variation in pace or tone, which led to an almost monotonous feel until very near the end. That's not to say it wasn't interesting, there just wasn't quite enough energy in the room for me, so while I was intrigued to see how it would end, I wasn't desperate to find out. This was a shame because the plot itself is a clever one, and I wanted to be more invested in the characters and their stories than I was.

That said, I did really like the concept of the play and how it was written, and the emotions of the characters were portrayed well throughout. I particularly enjoyed the beautiful singing between each section, as the songs themselves reflected perfectly what the characters had been through in the preceding scene. A complex, layered play that reflects our complex and layered humanity, it simply needs a bit more energy.

Moonlight After Midnight is on at Assembly George Square at 15:00 until August 28th, excluding the 9th and the 16th. For more information and to purchase tickets, visit the EdFringe website. 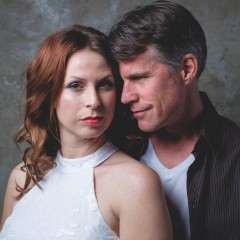