Red Bastard is an extremely bulbous, slightly sadistic and completely mad character, who spends this hour show informing the audience that they're all liars and that the rules of love are ridiculous. He asks a lot of very personal questions, puts people in difficult and sometimes extremely uncomfortable positions, and allows us all to judge each other whilst forcing us to also judge ourselves.

Occasionally, the mask is removed and we see the man beneath: Eric, a flawed and sincere man who reveals his deep vulnerability and insecurity, only to quickly cover it up again with a sadistic chuckle. We never actually learn much about him, and every tidbit that's shared only leaves the audience with more questions. It's both a tease and an attack, a farce and a deep, genuine insight into human nature.

Red Bastard himself has an excellent stage presence, silencing the audience with a glance and commanding the mood of the room with his facial expressions alone. He is clever with those he targets, demanding the truth without being too aggressive, and he repeatedly lulls everyone into false a sense of security before brutally ripping it away and exposing everyone as the liars we are.

I have to be honest - I spent the majority of the show feeling rather confused. I liked the madness, and the truthfulness, and the genuine emotion behind the show, but a lot of the time I really wasn't sure how I felt about it. The same cannot be said for the rest of the audience - he received a standing ovation - but I was not quite so convinced. Did I enjoy it? Yes, at times. Suffice to say it's not your straightforward comedy show. It's not your straightforward anything, actually. But hey. It's the Fringe. Who wants straightforward?

Red Bastard: Lie With Me is on at Pleasance Courtyard at 21:30 until August 27th, excluding the 14th. For more information and to purchase tickets, visit the EdFringe website. 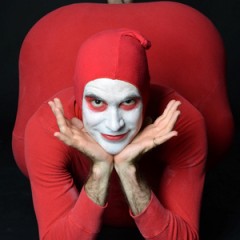 Red Bastard: Lie With Me