Tucked away in one of the many rooms at the Three Sisters, Stoph Demetriou brings his crazy humour to the Fringe in this whirlwind of a show. His relentless energy and willingness to do a wide range of bizarre things makes for an exciting and amusing hour.

Focusing on the Dunning-Kruger effect, which is when incompetent people overestimate their skill, Demetriou explores the nature of our minds and how both paranoia and confidence can be good for us. His show is informative without seeming like a lecture, and he is quick to mock any seriousness before it can negatively affect the positive mood in the room. The show is therefore both interesting and funny, and Demetriou balances these two sides of it well.

Demetriou uses video effectively, with a significant portion of the show dedicated to amusing cop-show spoofs and the conflicts between personifications of his paranoia and confidence. The videos are well-filmed and edited, lively and colourful, and are wonderfully humorous, although at times I felt they went on for slightly too long and specific jokes were milked until they weren't quite as funny any more. Overall, however, the show's script is well-written and flows reasonably smoothly, and the energetic pace lulls only rarely.

The slightly stranger aspects of the show include Demetriou stripping down to a leopard-print thong and pouring Diet Coke over himself, and an appearance of his very cool, hip, comedy rival TJ (also played by him). While some gags fell flat, he bounced back well and kept the audience engaged. His earnest, frantic nature is endearing, but partly arises from the fact that the show is still unpolished and a little all over the place. That said, the more ridiculous it got the funnier I found it, and by the end I'd had a good laugh. Definitely a fun way to end the day!

Stoph Demetriou: The Dunning-Kruger Effect is on at The Free Sisters at 23:10 until August 28th. For more information, visit the EdFringe website. 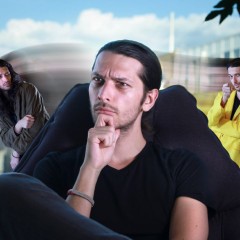