I have to begin by taking my hat off to both the writers and actors of this show. Rarely before have I seen such naturalistic, believable, real characters portrayed so convincingly onstage, not just at the Fringe, but anywhere. The two main characters had a beautiful chemistry onstage that perfectly conveyed their difficult relationship and convoluted feelings toward one another, and I loved how incredibly realistic nearly every conversation was. It takes serious talent, both in scriptwriting and acting, to make an audience forget that the play is scripted at all, and the company of Deadpan Theatre: Third Wheel certainly accomplished that; at least with me.

The storyline is lovely, focusing on two ex-best friends going on a road trip with the ashes of their other best friend as part of his dying wish. A combination of music, physical theatre, video and acting is used mostly effectively, although I felt a couple of the songs were slightly out of place. I wasn't sure the flashbacks worked quite as well as the rest of the show, and they seemed to take up a disproportionate amount of time, but I thought the videos were really well done, again partly due to how naturalistic they were.

The show is an emotional one, but not in a cry-your-eyes-out or laugh-your-head-off kind of way. That's not to say the emotions it evokes aren't genuine or powerful; the lighthearted moments are playful and amusing, and the more melancholy notes are all the more striking as a result. It feels life-affirming, in that way that stories to do with death often are. It's different, and quirky, and endearing, and well worth a watch.

Deadpan Theatre: Third Wheel is on at Gilded Balloon Teviot at 14:00 until August 27th. For more information and to purchase tickets, visit the EdFringe website. 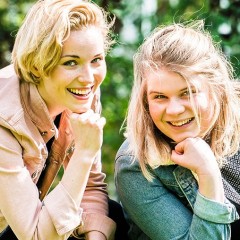