Like its parent show, Showstopper! The Improvised Musical, The Showstoppers' Kids Show is a musical creation like no other, with the company inventing a brand new show in front of your very eyes. Children adore the opportunity to decide how the plot unfolds, and the performers make sure to ask for suggestions and ideas at every possible moment. They are wonderful at engaging every kid, ensuring even the quietest ones get a say if they want one, and even inviting every child in the audience down to the stage to participate on several occasions. Making every child feel included is sometimes a difficult task, but one they pull off well.

Of course, the suggestions from the kids were bizarre, incredible and often completely ridiculous, and the company did an absolutely stellar job of taking every single idea and rolling with it. Nothing was too strange, and they became unicorns who made magic tuna sandwiches, 'flew' up and down the stairs, gave big sharks as gifts and started to die but then stood up and came back to life. I absolutely loved how willing they were to accept every challenge, and the adults in the audience could certainly appreciate and enjoy the difficult situations they were put in!

The clever use of cardboard boxes and black board markers proved a simple but effective way of creating scenery, props and costumes, such as a fireplace and unicorn horns. The musicians were, as usual, brilliant, creating a lively and jovial atmosphere from the beginning and creating wonderful, catchy tunes for the kids to sing along to. There was also a chance at the end for the kids to draw their own pictures on the cardboard, which many of them did with relish.

I think some of the act went over the kids' heads, however, and the songs, while enjoyable, were at times too fast for some of the younger kids to keep up. A few looked like they didn't quite know what was going on, which was a shame as the company made such an effort to make them part of it. That aside, the show flowed well and the atmosphere was a fun and lively one throughout. Without doubt a brilliant show for the kids, and one parents will appreciate and enjoy too.

The Showstoppers' Kids Show is on at Pleasance Courtyard at 11:40am until August 20th. For more information and to purchase tickets, visit the EdFringe website. 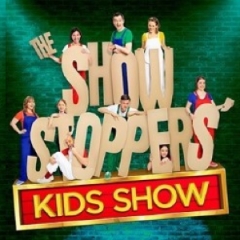